Log in with different email
For more assistance contact customer service
Learning and Your Child
Learning and Play
What is Concrete Play?

What is Concrete Play? 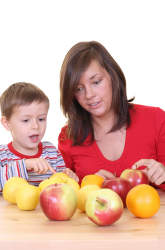 What is concrete play? Well, it doesn’t mean letting your 4-year old help Dad lay down the new cement walkway. Concrete play is any kind of tangible, hands-on play where your child uses his body or hands to manipulate things. The flipside of concrete play is abstract play. Think of it as hands-on versus hands-off. Let’s say you want to teach your child about apples – how to count them or the different types. If you show him a flashcard with three apples, discuss them, and point as you count them, that is considered abstract. Concrete play would be placing three real apples on the table so your child can touch them, pick them up to count them, smell them and even taste them. According to Early Childhood consultant Sylvia Ford, when engaged in concrete play, your child will actually absorb the information better than if he was just shown a picture.

Children under the age of seven benefit the most from concrete play. Ford explains, “Concrete play sets a foundation for knowledge of the abstract later on.” Children who have a lot of exposure to concrete play will much better understand abstract concepts later – when their brains are ready. Concrete play “helps the brain so naturally build on what it already knows. With abstract play, it’s all new and children have to take it all in at once,” explains Ford.

So when can you safely introduce abstract play? Around age seven is when a child is capable of focusing on multiple things simultaneously. Before that, there is only singular focus. They may switch from one thing to another, but only one at a time. You’ll notice the difference too – your child’s attention span for concrete play will be a lot longer than during abstract play.

Don’t worry if you’ve secretly been prepping your kid for Harvard with U.S. presidents flashcards. There’s nothing wrong with the occasional flashcard, as long as you are also engaging your child in concrete play. Society tells parents that in these formative years the brain is laying down pathways to use later, and that’s the window to prepare kids for school. But parents often take that as their cue to pump their kids with as much information as possible. Unfortunately, a child’s brain that is drilled with the abstract will rise to the occasion, but it will be because the brain learns to cope, and not necessarily because it truly understands the information presented. Parents may then hear the worrisome words ‘learning disability.’ However, their child may not be LD; but rather, their brains have simply had too much abstract and not enough concrete play early on.

Ford offers these concrete play activities you can try at home:

So file away the flashcards and pull out the pom poms. Get creative with home objects. It’s time to let your child get his hands on everything!

Next Article: The Lost Art of Play
We enable strictly necessary cookies to give you the best possible experience on Education.com.Cookie policy