What Dinosaur Discovery Can Teach Your Child 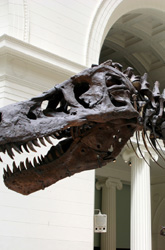 Without a doubt, dinosaurs are a popular topic for kids across the planet. Something about these extinct creatures from long ago seems to hold the attention of young or old, boy or girl. Though we don’t know a lot about dinosaurs, what we do know is fascinating to children of all ages. But why?

“I think the reason kids like dinosaurs so much is that dinosaurs were big, different from anything alive today, and extinct. So they are imagination engines,” explains Jack Horner, the paleontologist who discovered the Maiasaura and served as a technical advisor for the Jurassic Park films.

Teachers all over the country would agree. Dinosaurs are studied in classrooms each year, not only for the science behind the topic, but also because of the creativity it seems to spark in students.

Jennifer Zimmerman, primary teacher in Washington, D.C., explains.  “When we get to the unit on dinosaurs, I see their faces light up. Our science topic starts to trickle over into all other subject areas.  I see the kids pretending to dig for fossils at recess, and turning tag into a game of meat-eaters vs. plant-eaters.”

“The best part about this, though, is what happens with their writing,” Zimmerman says.  “I think it’s the mystery of dinosaurs – the fact that there are still so many things we don’t know – that inspires them to use that topic in their journals.” Children also feel powerful when asked to draw a dinosaur.  Since no one knows what colors dinosaurs actually were, a child can use what information he has – and his imagination – to draw a dinosaur as he sees it.

Studying about dinosaurs also leads kids to see what we don’t know about our planet and what we are still learning. “Dinosaurs are one of the best ways for kids to learn about the evolutionary history of our planet.” Horner adds.

Dinosaurs are powerful learning tools. So how can you help inspire and encourage the dinosaur lovers in your house?

Start with a trip! Dawn of the Dinosaurs, the only Triassic exhibit hall in North America, opened this past May at the New Mexico Museum of Natural History and Science in Albuquerque.  This exhibit, one of eight permanent exhibits at the museum, explores the plants and animals of the Triassic period in New Mexico and the world.

Kids can explore fossil evidence like a scientist in this new exhibit, and can also interact with scientists who’ve spent years cleaning and restoring fossils discovered in the area.

“Audience reaction has been overwhelmingly positive,” says Tim Aydelott, Public Relations Manager at the museum. “Visitors especially love the self-produced 4-minute animated video on evolution that we have in the exhibit.”

If you can’t make it to Albuquerque, consider a few other dino-adventures:

Want to explore the world of dinosaurs without leaving the house? Tune in to the 13 Best Songs About Dinosaurs, or check out these great books for the dinosaur lover in your family:

My Big Dinosaur Book (My Big Board Books) by Roger Priddy

How Do Dinosaurs Say Goodnight? by Jane Yolen

Danny and the Dinosaur by Syd Hoff

Dinosaurs: The Most Complete, Up-to-Date Encyclopedia for Dinosaur Lovers of All Ages by Thomas R. Holtz

Dinosaurs have been gone from our world for a long time. But their popularity never seems to go out of style. Schools and families can use this enthusiasm to encourage kids in other areas as well, and inspire the next generation of dinosaur lovers and learners.