Log in with different email
For more assistance contact customer service
Child and Adolescent Development
Play and Children
Mine, Mine, Mine! What if Your Child Doesn't Share?

Mine, Mine, Mine! What if Your Child Doesn't Share? 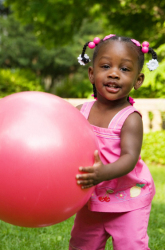 How many times have you had a play date go something like this: little Joey comes over and sees your son’s trucks. He reaches for the truck only to hear the shriek of your child screaming, “mine!” You think to yourself that, technically, it is his. He’s not wrong to want to keep it. But in order to be polite, you ask him to “share” the truck with Joey. He loses it, you find yourself getting more and more irritated with his behavior, and the play date is over.

Sharing is a difficult concept for most children, especially given the fact that our culture really doesn’t promote sharing at all. Messages of wanting more, needing more and getting more are plastered throughout the community. Individualism and competition are highly regarded qualities. Children, of course, hear and follow these messages. So it's ironic that they're expected to know how to share at a young age when the rest of the world is telling them not to.

Most experts think it’s wrong to force children to share—they need to get there developmentally by acquiring the qualities of empathy, caring and generosity. Only then will they have the capacity to share. Toddlers live their life in the present, so when they are playing with a toy and it is ripped away, they think it's gone forever. They have no concept of time, and a sense of time is fundamental to a child’s understanding and ability to share. Developing a sense of empathy is critical, too. In fact, refusing to share and acting aggressively are simply the ways in which children explore social interaction.

Karen Friedland-Brown, a parenting educator and child development specialist at The Parents Place in Palo Alto, CA, suggests a different approach: “I like to talk about taking turns, as opposed to sharing. Sharing implies two children using the same thing at once, which is very unusual. Even adults don't like to do that. But taking turns, and playing together side by side are good goals that we need to teach.”

Most experts also agree that children shouldn’t be forced to give up a toy or a special thing they have under the umbrella of sharing. According to Friedland-Brown, “Children should never be forced to give up a toy or object with which they are playing. All children have the right to hold on to what they have for as long as they want it. When we respect children's needs to keep what they have, they are much more likely to give it up willingly.”

So how can parents help facilitate the on again, off again process of sharing? Once the child is developmentally ready, there are a few important things you can do to help the process along.

First, if you’re having a play date at your house, put your child’s special toys away. Ask your child to help you find something his friend can play with before he comes over. By bringing your child into the decision-making process, you give him some control. Take out and have ready some neutral play things such as paints, crayons, chalk or play-doh. This will encourage the children to play peacefully side-by-side. Suggest meeting in a park or museum, rather than at someone’s house. And of course, don’t force your child to give something up.

All children grow and develop at a different pace. If your child isn’t sharing, don’t fret. As Friedland-Brown says, “Just as children learn to walk, talk, and do other skills at varying ages, so it is the same with sharing. Temperament plays a huge role in when children can learn to take turns.”

Modeling is another great way to teach your child to want to share. And it doesn’t have to be just sharing “things.” Teach your child by sharing your time, your listening skills and your concern, and you will be giving him invaluable skills toward becoming an empathetic and generous person.