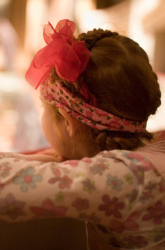 Want to boost literacy? Teach your child to imagine the unimaginable? Cultivate curiosity? Get thee to the theater, and bring your kids.

The children's theater movement is led by Europe, but the U.S. is not far behind. And we're not just talking about the bustling theater town of New York. The third largest children’s theater in the world is tucked away in Minneapolis, Minnesota. Other mid-sized cities—from Dallas, to Tempe, to Nashville, are also cooking up kids’ fare in full-time children venues.

With the introduction of No Child Left Behind, many schools that used to round out reading, writing, and ‘rithmatic with a yearly jaunt to see Shakespeare in action, or Jack ascending the beanstalk, have now scrapped these field trips in favor of spending more time preparing for standardized tests and drilling “fundamentals”. The question is, how can you, as a parent, pick up the slack?

No one would argue the importance of literacy or fractions, but study after study has shown that the arts are more than fluff. Longitudinal data of 25,000 students involved in the arts, conducted at UCLA’s Graduate School of Education by Dr. James Catterall, shows that consistent participation greatly improves academic performance and significantly bumps up standardized test scores. Students who make time for the arts are also more involved in community service, and less likely to drop out of school. And we’re not just talking about upper middle class kids. These facts remain, regardless of a child’s socio-economic background.

Peter Brosius is the Artistic Director of the Children’s Theatre Company of Minneapolis, which serves up to 350,000 young people and families a year. He says you don’t have to believe in the old phrase, “the arts for arts sake”, to find compelling reasons to bring your child to the theater on a regular basis. “When you look at the US and where the growth in the economy is, it’s evident that there’s a need for idea generators. Our country is not necessarily anymore a producer of goods. Our economy thrives because we’re a producer of ideas,” he says. “Facts are just facts and as a society, with a touch of the calculator or a hit of google, kids can find a factual answer. But that can’t teach a mind to be subtle and flexible.”

Theater also connects to the importance of reading. A play has the ability to jump a story off the page and bring it to life. This can be a revelation to regular bookworms, but also a real boon to reluctant readers. “Part of it is that what’s happening on stage is very similar, in a way, to the play acting and role playing all children do. It’s live, and good plays are just a little bit ‘incomplete’, if you will—they need the audience to complete them, and they change slightly with the audience. Films, of course, are static,” says Kim Peter Kovac, President of Theatre For Young Audiences/USA (TYA/USA), a national organization for professional children’s theaters.

While plays work to jumpstart the imagination, they also lengthen the attention span. At first, Hartzell says, sitting still in a darkened room may not feel natural for children. But that’s precisely why it’s important. Because TV is such a popular form of entertainment, she says, kids aren't used to focusing for an hour or an hour and a half. “Kids today see a new image every 3-4 seconds. They’re used to constant change. And they don’t listen as well,” she says.

For parents still recovering from their own experiences with theater for kids—slapdash unprofessional productions that lasted way too long, take heart. This is not the children’s theater of yesteryear. In fact, it’s not even called children’s theater anymore, it’s called “theater for young audiences.” Sure, many of these theaters still do fairy tales and classics, but they’re also pushing the boundaries—offering stories about the Holocaust, a musical about teen alienation, or a modernized version of Antigone. Brosius says this vibrant retelling of history makes learning come alive. “When they connect with a play about a particular time period, they’re hungry to learn, they’re driven to learn,” he says.

When should you get your kids started? The sooner the better, says Kovac. “There have long been a lots of shows for 5-years old and up. More and more companies are experiementing with shows for ages 3 and up”. In Europe, companies are creating shows for kids as young as 1 ½ or 2.

Brosius says there are definite advantages to starting young. If you inspire a love of theater early on, there's a better chance that your child will develop creative gifts, and maintain a lifelong appreciation for the performing arts. “Kids brains are being hardwired and parents can help spark those neural pathways of creativity,” he says.

The good news is, the number of children’s theaters in America seems to be increasing, rather than shrinking. And the quality is better than ever because in recent years, companies that produce theater for young audiences have been getting something they’ve been struggling with for years: respect. In 2003, the Children’s Theatre Company, based in Minneapolis, became the first ever children’s troupe to win a Regional Tony award.

So take advantage of the boom. Not sure where to start? For a list of the 90+ theaters that are members of TYA/USA, go to www.assitej-usa.org/members.html. Some of the better known companies in the country, in alphabetical order, include:

There are also some great festivals such those that take place in Pittsburgh, Philadelphia, the Flint Hills International Festival at the Ordway, St. Paul, and the Seattle International Children’s Festival.

Next Article: Early Art Exploration
We enable strictly necessary cookies to give you the best possible experience on Education.com.Cookie policy