Log in with different email
For more assistance contact customer service
School and Academics
Back to School Preparation
Win the Battle of the Backpack: How to Organize Your Child's Bag

Win the Battle of the Backpack: How to Organize Your Child's Bag 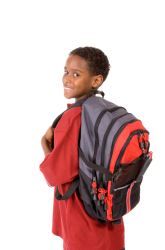 When it comes to school backpacks, just about every parent has a story, and it isn’t pretty. You know the themes: Exploded tuna-pickle sandwiches. Pudding-slimed math books. And of course, a perennial favorite: the Homework Black Hole.

If, like many folks, you’re near despair, take hope. In her book, The Organized Student, educational consultant Donna Goldberg grabs the issue by its shoulder straps. After all, she explains, she’s a survivor herself. She still remembers, years ago, when her son’s sixth grade teacher sounded the alarm: he hadn’t turned in a single assignment in months. Sure enough, Goldberg found every page—crumpled in her son’s bottomless backpack.

What can parents do? First, says Goldberg, have some sympathy. Getting organized, she says, “Is not about [kids] being lazy, and it’s not about being forgetful.” It’s about real-life, practical choices. Here is her handy, four-step system, which she’s dubbed “PACK”:

P: PURGE. Backpacks aren’t file cabinets and they aren’t wastebaskets. Once a piece of “traveling paper” has been carried to its destination, take it out. File it if it’s for a class or for family reference; toss or recycle if it’s over and done. But do purge your backpack regularly—once a week at least, and at the end of every unit and semester.

A: ACCESSORIZE. Don’t skimp, Goldberg urges, on good organizing tools like lightweight notebooks (beware monster binders--too heavy to open), pen containers, and a daily homework planner. Goldberg also recommends a backpack with a pouch for drinks. “Ever seen a backpack with a loose water bottle rolling around?” she says. “Enough said.”

C: CATEGORIZE. While accessories are necessary, categorization really makes them work. This stage takes some reflection, and parents can help. Kids should be able to separate their items enough to be able to find them again quickly. For example, thin books shouldn’t be sandwiched between heavy ones; they’ll get lost. “Purchase a backpack with multiple sections,” Goldberg advises, “and assign everything a home...If necessary, create a ‘map’ of the backpack on an index card.”

K: KEEP IT UP. “Putting things into systems does not make any person organized,” Goldberg counsels. “It takes practice, practice, practice.” Don’t expect perfection, especially at first; but do help your child build constructive routines, such as purging the backpack every Sunday evening before the week begins.

As a fellow parent, Goldberg understands that organizing takes patience. “It’s perfectly fine,” she says, “to have a bad day or a bad week. We all do it sometimes.” But in the end, she says, a clean, well-tended backpack has priceless benefits. Any student will be more successful, she promises, when it’s clear that there’s a place for everything, and everything is in its place.

Next Article: Four Ways to Help Kids Talk About School
We enable strictly necessary cookies to give you the best possible experience on Education.com.Cookie policy