Log in with different email
For more assistance contact customer service
School and Academics
Math and Inspiring Your Child
Math for Babies? What You Need to Know

Math for Babies? What You Need to Know 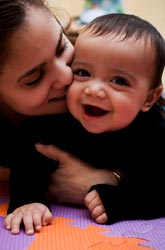 With their bright, wide eyes and tender skin, babies are the epitome of innocence. So it's easy to assume that they understand very little about the world around them, and for many years, researchers concluded just that. They generally regarded a baby's brain as a naive, blank slate—and placed the vast majority of responsibility for cultivating his intelligence on the power of nurture. The newest wave of research is proving that it’s not quite that simple.

"New laboratory experiments have shown that, from very early on in life, babies think about objects, events, and people in some sophisticated and surprising ways," says Lisa Feigenson, Ph.D., of the Laboratory for Child Development at Johns Hopkins University. Babies' perception of numbers is one of the most intriguing topics being reevaluated. That's right: numbers—and not just for toddlers. Feigenson explains that the foundations for mature thought, and even a rudimentary sense of numbers, are in place right from birth. So what's really going on in that growing brain? And if babies are as smart as scientists now claim, what can be done to boost these abilities?

In a 1992 study conducted by Karen Wynn, Ph.D., Professor of Psychology at Yale University, infants as young as 5 months were able to focus and follow a demonstration in which two dolls were placed behind a screen, which was then lifted to reveal either one, two, or three dolls. The study consistently found that babies looked longer at the incorrect outcomes—when the lifted screen revealed either one or three dolls—than the correct display. These findings laid the foundation for the controversial idea that children in their first year of life are able to understand abstract number and math concepts.

More current investigations show that this wasn't just a fluke, either. This study has been replicated and revised nationwide, providing similar, and in some cases, more extensive, results. In the wake of the newest research, the emerging picture of a baby's brain is considerably more complex than that of the primitive, mentally-vacant infant that prevailed for years. The short of it is that your baby probably knows more about math than you think.

According to Elizabeth M. Brannon, Ph.D., Associate Professor in the Department of Psychology and Neuroscience at Duke University, babies and adults both possess an "approximate number system." In much the same way that adults are able to look at a number of items and tell whether there are more or less items than in a different display, babies can tell the difference between different arrangements of dots—but only if they differ by enough. Infants' ability to decipher the difference between visual displays of numbers becomes more sophisticated over time, but the crux of these findings is that there is a fundamental system in place from birth.

How did the researchers draw their conclusions? By habituating babies—essentially, getting them bored with a certain number of dots in a display. Once they start to spend less time looking at this repeated visual, they're shown a different display of dots. Researchers observe their reactions, and in most cases, infants look at the new display for a much longer time, indicating that they notice a difference. Scientists view looking time as a strong, reliable indicator of a baby's expectation (or surprise) at what he sees.

As newborns age, their appreciation of numbers extends to arithmetic, too. In an adaption of the doll study, Kolleen McCrink, Ph.D., and Karen Wynn, Ph.D., presented nine-month-old babies with short films which depicted scenes in which five rectangle "characters" were hidden from view, and then five more followed. When the object hiding the rectangles moved off the screen, either five or ten rectangles were revealed. Babies looked longer at the incorrect outcome of five rectangles, than the expected outcome of ten rectangles. They found the same results when similar "subtraction movies" were shown.

So, what does this mean for parents? Can you raise a genius by teaching your baby advanced math concepts from day one? The bad news is that scientists can't agree on exactly what can be done to influence the mathematical capacities of very young infants. However, they do have some ideas about activities that help point babies and toddlers in the right direction:

It's important not to stress too much about teaching math to your newborn. It's not necessary to push babies to start counting right away, or to overwhelm them with lessons or flashcards. The good news, and perhaps the most important take-home of these studies, is that this rudimentary sense of numbers is both inherent and universal in infants.

"Babies are amazing learners, and they do this all without our help!" says Feigenson. "The best thing parents can do is be engaged with their children in everyday activities. Talk to them—about numbers, about the toys in the playroom—about anything at all. For a baby, every experience is an opportunity for learning... and engaged infants become engaged children."

Next Article: Core Concepts of Prenatal, Infant, and Toddler Development
We enable strictly necessary cookies to give you the best possible experience on Education.com.Cookie policy