Log in with different email
For more assistance contact customer service
Child and Adolescent Development
Rock 'n' Roll: Tips to Get Your Baby Rolling Over

Rock 'n' Roll: Tips to Get Your Baby Rolling Over 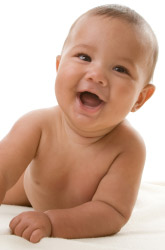 During the first few months of your baby's life, it's basically business as usual: eat, sleep, poop, repeat. Still, as a new parent you're probably enraptured by every smile, coo and movement from your growing child. When your newborn hits the four to six month mark, you'll start to notice some exciting changes in the way your baby interacts with the world around her. Instead of hanging out contentedly on a blanket or in her crib, she'll start testing her boundaries and preparing her tiny body for more movement.

The natural instinct to roll comes at different times for each baby, and rarely is there a child who simply cannot roll—every kid simply develops at a different rate. If you're baby's not starting to roll by six months and you're concerned about a developmental delay, talk to your pediatrician.

Rolling over is a vital step for physical development and scooting, crawling and getting around. Here are a few things that you can do to usher in a new age of babyhood in your home, and help your baby build the muscles necessary to rock and roll!

If your baby has reached the six month mark and seems uninterested in turning over, speak up at your next baby check-up. Your babe might just be a slow starter, but it could be a developmental delay. With a little extra care and attention, most uncomplicated issues can be dealt with through physical therapy and home exercises. Before too long, your baby will be shake, rattling and rolling with the best of them!