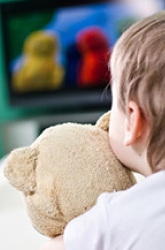 You’re proud of yourself for limiting your child to just 20 minutes of television a day, and rightfully so. But did you ever think about the television that she might be exposed to when she’s focusing on another activity? According to a 2012 study published in Pediatrics, this type of television exposure, called background television, may be more common—and more harmful—than you think. The study’s results were staggering: the average child from 8 months to 8 years old was exposed to 232 minutes (nearly four hours) of background TV each day.

Why Background TV Is Harmful

Research shows that ambient noises like background television can interfere with a person’s cognitive processing. These kinds of noises pull your attention away from whatever you are doing at the moment, even if you don’t realize it. “These frequent disruptions are linked to poorer academic and cognitive outcomes,” says Deborah Linebarger, associate professor of education at the University of Iowa and a coauthor of the study. Dan Anderson, psychology professor at the University of Massachusetts, also found that background TV reduces the quality and duration of children’s play, as well as limits the number and quality of interactions between the child and available parent—not quite what we’re hoping for when raising our kids.

Here are some suggestions from the authors of the study to help reduce the amount of background TV your child is exposed to:

The bottom line? Turn off the television unless you really want it on. That way, your child will be able to focus his attention on thinking, playing and interacting with others without any interference.

Next Article: Offline vs. Online Parenting: Where Do You Stand?
We enable strictly necessary cookies to give you the best possible experience on Education.com.Cookie policy