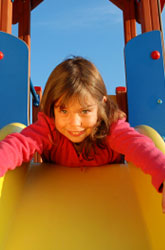 Hopscotch, jump rope, dodgeball ... did you know that playing these games as a kid actually made you smarter? Exercise, particularly the kind that challenges your body to move differently or learn new tasks, helps grow neurons and increase the nerve pathways in your brain.

In fact, according to the Franklin Institute and a 2008 study published in Developmental Neurorehabilitation, muscles activate brain cells and strengthen them. Watching your child as she tries to learn to hop on one foot or use a non-dominant hand is actually firing up her brain cells. Not only are playground games for kids a fun way to teach, they're also a great opportunity to keep your mind sharp. Adults who learn new tasks and activities help ward off age-related diseases like Alzheimer's.

So bust out the chalk, round up some kids, and let the games begin!

The next time you're looking for exercise and a brain boost, try out some of these playground games. For kids, there's no better way to learn then to have fun doing it!