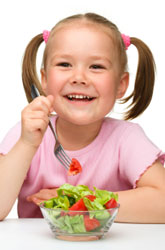 If your child wrinkles her nose at peas and won't come within ten feet of broccoli, recent science shows that offering these veggies with a reward on the side may be your relief from power struggles at the dinner table.

Researchers working on a 2011 study from University College London served up carrots, celery, peppers, sugar snap peas, cabbages and cucumbers to a group of 3- to 4-year-olds, and tempted them into tasting the veggies with tangible rewards. One group was given a "real" prize, such as a small toy or sticker; another group was given praise and positive reinforcement, and another batch of kids was simply exposed—in a neutral way—to the vegetables. The last group was a control group, with no intervention.

After three months, the kids who were rewarded for their taste-testing ate more vegetables, with no reward present, than those who didn't. The little eaters who were exposed to veggies with no reward increased their "liking" for the foods, but the effects tended to fade over time. All groups that were exposed to the healthy items liked and ate more of them than the control group.

The study suggests that, when used wisely, bribes don't always have the disastrous effect that parents fear. One of the study's authors, Dr. Jane Wardle says, "My gut feeling is that parents often use rewards for behavior change in children and when the rewards are very small and only given for a brief period (10 days in our study) I cannot think that they are hazardous. I'm not even necessarily against bribes if they help someone get over reluctance to do something."

So at mealtimes, try rewards and reinforcement for positive health results, instead of nagging and negativity. Experiment with these simple techniques:

With rewards, you can stop hiding the veggies—just let them all hang out! Swap the scolding and nagging for positive thinking and real-time perks. It takes time and a lot of patience, but the health benefits for your baby might just be worth it.