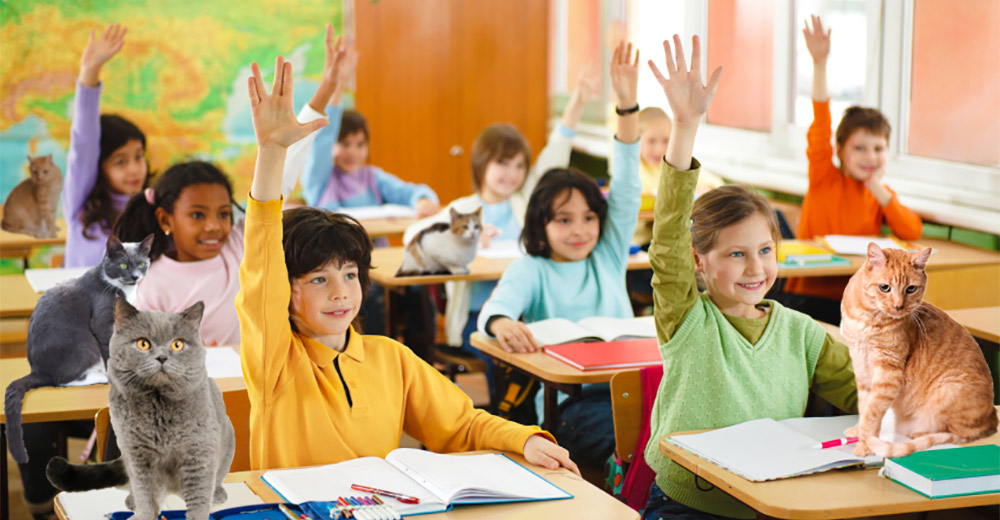 A pedagogical research laboratory in Schaumburg, Illinois has released new findings on feline and youth pedagogy. The Research Center of Academic Excellence announced unprecedented findings on the benefits of co-learning between children ages 3-16 and domestic cats of all breeds. The study, funded by the popular website Education.com, was conducted in a controlled environment over the course of two years.

“This is really exciting stuff,” remarked lead scientist for the study, Dr. Joseph Dircks. “We’ve found that students who learn in an environment in which cats are peer learners promotes knowledge retention by 62 percent and improves students’ interest in discarded cardboard boxes by 79 percent. Remarkably, we found that students in these environments could learn about new topics at an accelerated rate. Many of the students advanced their math and mouse-reconnaissance skills by one full grade level in only three months.”

The cats themselves also learned new skills. “We kept the cats at the forefront of our lesson plans and classroom set-up,” noted one of the study’s teachers, Ms. Elaine Nguyen. “By catering to the feline learners in my classroom, we were able to make discoveries about student responsiveness to objects like laser pointers and spools of yarn.”

These feline-inspired elements are apparent upon observation of Ms. Nguyen’s class in session. Students sit on their chosen objects during circle time—most choose computer keyboards or the teacher’s favorite sweater—and rush to get in line when a laser pointer is shone on the classroom door. “The laser pointer really has been a game changer for behavior management,” noted Ms. Nguyen. “I use it to get students in line, bring their attention to the smart board, and as a motivational tactic during P.E. They have an obsessive interest in ‘catching’ the red dot.”

Dr. Dircks and a select group of scientists from the study have been commissioned by a prominent charter school organization to begin rollout of feline co-learning programs in elementary and middle schools throughout the country, including charter schools in California, Chicago, and Maryland. “We are encouraged by the findings in this study, and are looking forward to seeing similar results on a wider scale,” commented Dr. Dircks. “If all goes well, we hope to have cats in every classroom in the United States by 2024.”

Read more about Education.com’s response to the study here.