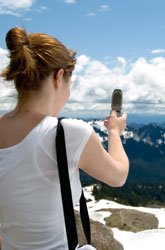 Cell phones: a defining feature of the youth culture. Educators have labeled them a classroom disturbance, and they have been banned in most schools across the country. But, is it possible to think that there could be, in between the deafening ring tones and the obsessive text messaging, some redeeming educational qualities to these devices?

Liz Kolb converted from being one of those teachers who “didn't see value of cell phones on campus” to devising ways to use cell phones as learning tools. Kolb, a former middle school and high social studies teacher and technology coordinator, said she was doing a blogging activity with a group of teachers when a message popped up on her screen telling her she could create an audio-blog with her cell phone. “It was the easiest podcast I ever made. I said, 'Wouldn't this be a great way to do podcasts as homework!' It was a real ah-ha moment,” she says.

But when she went out searching for resources on how to teach with cell phones, she found none so, she says, “I just started playing around.”

What she came up with was a host of ways educators and parents could use cell phones to enhance learning outside of the classroom, and perhaps just keep students engaged. Kolb, who is now completing her doctorate in learning technologies at the University of Michigan, says while she still thinks cell phones shouldn't be used inside the classroom, she believes there are ways to use a cell phone as “an anytime, anywhere, data-collection tool.”

Take, for example, this science lesson: your eighth grader is learning about ecosystems, and is tasked with taking photos of insects on his phone to be studied later in class. “There is a genuine excitement about the lesson because they can use their own cell phone,” she says. And, says Kolb, when student's can connect their own culture with what's happening in school they're education becomes immediately more meaningful to them.

And, says Kolb, this type of technology integration will better prepare students for the 21st century workforce, where jobs are performed on mobile devices, such as cell phones. “We see it in places where we compete, such as China,” she says. “The fact is that they already value the cell phone as a professional tool. Now we need to teach kids how to use a phone ethically in the work environment of the future.”

Kolb, who highlights her ideas in the new book, Toys to Tools: Connecting Student Cell Phones to Education, says students don't need the latest high-tech phones to conduct these mini lessons. In fact, she says she did all her research for the book with one of the cheapest phones on the market. About 95 percent of phones today have cameras, albeit poor ones. But, says Kolb, even a poor camera is a teaching moment waiting to happen.

How can you leverage these teaching moments at home? Here are some of Kolb's suggestions for using the phone as a learning device.

Ever wanted to take pictures in a museum or at an event, but have been told flash photos aren't allowed? Enter, the cell phone: the handy-dandy, go-anywhere, flash-free documentation tool. Kolb says a cell phone can be a great way to document family vacations or field trips. Post the photos to a private space, such as flickr.com or flagr.com, and add them to a map to track the places you've been. That report on “What I Did Last Summer” just got a lot more interesting.

Anyone with an adolescent in the house has seen text speak: “c u l8tr.” Some say this new tech language is ruining literacy. Kolb calls it “a new literacy that we're adapting too.” This adaptation can lead to all kinds of creative ways to reach kids. Kolb says she knows of one 11th grade teacher who encouraged kids to text message each other about Shakespeare as a way of studying for a unit review. They were asked to rewrite what had happened in a particular act, essentially transcribing old English to new English—a tough task considering that most text messages allow no more than 160 characters. “It really forced them to think about what they were summarizing and what was the most important part of the act or character,” Kolb says.

Besides texting about literature, teens can use their text message function to become writers themselves. Textnovel.com allows you to collaboratively (or individually) write your own novel through text messaging. It's like an any-time, any-where writing forum. Waiting in line at the DMV for your driver's license? Add another chapter to your autobiography, or another line to your poem. Your text message gets sent to the web site where your story is logged, and the composition can be set to either public or private. “It creates a different literacy, and an opportunity for students to be creative and innovative, while still participating in traditional literature by summarizing and understanding texts, and creating plots and settings,” Kolb says.

Do you have a history buff on your hands? Does your child want to learn more about how to reduce carbon footprint? Web sites like textmarks.com allow teens to position themselves as experts on topics and share their knowledge. The site allows students to sign-up and create a campaign (such as “Go Green!”) to which friends and family can subscribe. Then, after researching facts, figures and informational tidbids, your child can share that newfound knowledge with his subscriber base on a regular basis.

Be a Mobile Journalist

Let's say you're visiting Grandma in Louisiana and it starts to snow for the first time in 45 years. Your teen can immediately whip out his phone and start snapping pictures, or rolling video, to become what's called a mobile, or citizen journalist. Your budding reporter can then send that documentation through her phone to a major news organization, such as CNN ([email protected]), or to your local newspaper or access television station. If entries are published or broadcast, the contributer receives credit and, in some cases, could even get licensing for the news stories that she creates. But, besides fame, documenting their world gets kids thinking critically about what is happening in their environment—an important academic skill. “Plus, if they experience something they want to remember, it's a great way to make a memory,” Kolb says.

Be an Oral Historian

One of the greatest features of the cell phone is the built-in recorder. The only problem is that they often end up being huge files. Solution? Drop.io This password protected web site stores your audio recordings in a private place online. Your teen will receive a number to dial from her phone, after which she can set her phone down and start recording. Kolb says this is a great way to record oral history through grandparents, senior citizens in your community, or local historians. Your child can make a digital storybook with pictures, or just save the conversation for posterity's sake. “You have your tool in your pocket at all times,” she says. Is your child's favorite author coming to the next town over? She can record a reading or book talk with her phone, and maybe even score an interview afterwards.

Be a Radio Star

Radio theater isn't dead, it's just taken a while for people to figure out how to produce this art form through their cell phones! Your child can create an original radio play, from scripting straight through to broadcast, and record it through an online podcasting site, such as Gcast. Spice up the performance with some simple sound effects, dramatization and music with a 1930's theme.

Got a budding musician on your hands? Your child can use textmarks.com to create text message alerts promoting his band or his latest gig. Or, your child can send his music to friends and family through mozes.com, so it can be used as a unique ringtone.

And a couple ways to make family life easier...

If your teen is attached to his cell phone, but has trouble organizing himself, Kolb suggests signing him up for a service such as dial2do.com. It allows you to create speak-to-text messages and e-mails, make calendar appointments, and listen to your calendar through your cell phone. “It's a very functional tool,” she says.

Before engaging in any of these programs and services, Kolb says parents need to lay down some safety guidelines.

Kolb says the bottom line is that parents and educators need to face facts: cell phones aren't going away anytime soon, but there is a silver-lining to the cell phone culture that we could be tapping. With a little innovation, Kolb says we can teach kids to use their cell phones as a way to learn about, document, and organize their world in preparation for life in the 21st century.