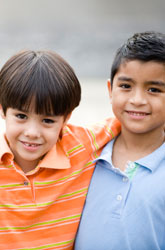 “Intelligence plus character—that is the goal of true education.” So said Martin Luther King, Jr. about the role of education in society. Proponents of today’s character education programs in schools agree with his assessment, and they work to teach students about essential life skills and values that go beyond the blackboard.

Another study, this one published in School Psychology Quarterly in 2008, found that social-emotional competence, which is closely related to character education, strongly influenced the academic skills of almost 300 third-grade students that were included in the study. More importantly, a recent meta-analysis of over two hundred different studies has found that character education truly does have a positive effect on academic achievement, increasing achievement test scores by 11 to 17 percentage points.

Rutgers Professor of Clinical Psychology Maurice Elias, who has researched this topic extensively, stresses the importance of character education in the classroom. “It is clear,” he says, “that a successful school is going to be a school that is concerned with the character of its students.”

But how exactly does working on character and social-emotional learning help students succeed in the classroom? To understand this, you need to look at the list of components that are discussed in most character education programs.

For example, students are taught social awareness, including how to cooperate, work in a group effectively, and take turns. These skills are important for use in groupwork in the classroom. Character education also emphasizes responsibility and respect, both of which are necessary for classroom success. After all, if students don’t take responsibility for their schoolwork or for handing in their homework on time, and if they are unable to act respectfully towards the teacher and towards other students, they will likely struggle to stay afloat in the classroom.

In addition, students in a character education program learn how to manage their own feelings and deal with them appropriately. “That’s so important,” Elias maintains. “Some kids come from difficult home environments. If they can’t deal with those feelings once they get to school, their learning is going to be limited, no matter how smart they are.”

Not only does character education give students the tools to work well in the classroom environment, it can also give them the tools they will need to understand the actual content they are learning. Here are a few examples:

Why Is Character Education So Important Today?

If you look at the history of modern American education, you see a certain trend. “The No Child Left Behind Act has been around for ten years,” says Elias. “And for ten years we’ve focused on academics to the exclusion of nearly all else. When it hasn’t worked, our response has been to increase our focus on academics even more.” The nation has spent an extraordinary amount of money on improving the academics in the classroom, and teachers have been forced to teach content, content, and more content. In the minds of many character education supporters, it’s time for a change.

Disrespect, irresponsibility, and other character flaws are the bane of today’s society. Children absorb these character flaws as if through osmosis, purely by looking at those around them. In Elias’s opinion, this starts with political leaders and governments who act disrespectfully towards teachers, forcing them to conform to test prep that doesn’t help and negatively labeling the ones who are less successful with raising their students’ test scores. “Why should children respect people who are so publicly disrespected?” Elias asks. The answer? They don’t.

How Does Character Education Work?

If you’ve never seen character education at work before, you may wonder what it actually entails. In truth, it looks almost exactly like any other form of high-quality instruction. The teacher explains a concept to the class, they discuss how to apply the concept, and they use experiential learning – such as role playing or groupwork – to ensure that they understand what they have learned. But character education is not limited to actual instruction time.

Everyone needs to be onboard with this initiative in order for it to work. Kids are usually receptive to the idea, but teachers also need to agree to create a school climate that will enable the program to succeed. That means, for example, that teachers do not only preach respect, they also practice it – towards students and towards each other.

Child psychiatrist Dr. James P. Comer has said that character actually gets caught like a cold. Supporters of character education, as well as the research that stands behind them, maintain that their programs can help children to succeed not only in the classroom, but in life.

Next Article: Should You Pay for Grades?
We enable strictly necessary cookies to give you the best possible experience on Education.com.Cookie policy