Log in with different email
For more assistance contact customer service
High School
Is Your Child Sexting? What Parents Need to Know

Is Your Child Sexting? What Parents Need to Know 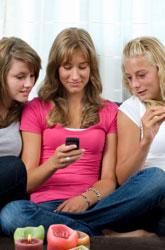 Parents may never have heard of it, but surveys show that 20 to 60 percent of teens are doing it: “sexting”. While this troubling trend continues full speed ahead, parents, teachers and lawmakers are struggling to react appropriately to the phenomenon that puts kids at risk for exploitation, harassment, and even felony charges.

What is sexting? A combination of the words “sex” and “text messaging,” “sexting” is the sending of sexually provocative messages or visual images to and from cell phones and computers. Kids as young as 9 years old may be doing in it, according to the research of Susan Lipkins, a psychologist specializing in bullying and hazing.

Some teens and young adults use sexting to flirt, others to have fun or be funny, and still others to gain recognition, improve their social status, or hurt or harass. “Sometimes it's gossip, sometimes it's a mating call, sometimes it's sexual harassment,” says Lipkins, who urges a nuanced view of the phenomenon.

“It's an abrupt change that's uncomfortable and scary to adults,” she concedes, but says parents need to look at the trend as an expression of larger changes in the way teens and young adults relate sexually. “It's really an expression of the kinds of sexual behavior they're having,” she says, noting that young people today may be more interested in casual sex than relationships, in contrast with past generations. “Many girls are not looking for a relationship: they're looking for experience and looking for freedom. Sexting is just a reflection of what's actually going on.”

Sexting makes use of cell phone and computer technology to send sexually provocative images and messages, and with increased accessibility comes greatly increased risk. Gone are the days of a girl slipping a suggestive Polaroid photo to her boyfriend: now, provocative photos sent in private can be forwarded to the entire school body after a break-up, posted online, and available in perpetuity over the Internet. That's exactly what happened to 18-year-old Jessica Logan, who committed suicide on July 3, 2008 after her ex-boyfriend forwarded nude images she had sent him to hundreds in their high school.

Emotional trauma is just one of the dangers associated with sexting behavior. Several teens across the country are now facing child pornography charges for sending or receiving sexually provocative images of themselves or peers. In Wyoming, three high school girls have been threatened with child pornography charges over digital photos in which they appear topless or in their underwear, and similar cases have appeared across the country, with charges ranging from misdemeanor to felony obscenity.

"Kids should be taught that sharing digitized images of themselves in embarrassing or compromised positions can have bad consequences, but prosecutors should not be using heavy artillery like child-pornography charges to teach them that lesson," said Witold Walczak, Legal Director for the ACLU of Pennsylvania, which has filed a lawsuit against the Wyoming County district attorney. "Child pornography is a terrible crime that involves the abuse and exploitation of children, neither of which exists here," said Walczak in an ACLU press release. "In many states these charges would land these kids on Megan's Law databases, with their pictures on Internet registries for ten years or more, and prevent them from getting many types of jobs.” That means that convicted teens could end up as registered sex offenders for the simple act of taking and sending photos of themselves.

While the legal system is slapping teens with outsized charges for sexting behavior, it's the real predators that we should be worried about, says Richard Guerry, Executive Director of the Institute for Responsible Online and Cell Phone Communication. Guerry warns that private videos and photos are increasingly becoming stolen fodder for sexually suggestive or explicit websites and blogs, even when the personal content is password protected or saved on a private hard drive.

The consequences of 'sextcasting', the wider dissemination of images and video across the Internet, are far more serious than those of simple camera-phone messaging, says Guerry. “Sexting is limited to cell-phones and is really a method of 'sextcasting,' which is a much larger issue.” Parents and lawmakers worried about sexting are already behind the times, says Guerry, who says that where previously parents worried about keeping kids from stumbling across online pornography sites, now they should be worrying about preventing children from becoming unwitting “content providers”.

It's easy to vilify sexting as an out-of-control trend to be stopped at all costs. But parents should consider sexting in the larger context of the changing sexual and technological attitudes of the next generation. “We need to really take a step back and and look at it and understand it,” says Lipkins, who thinks of sexting as a symptom, not a source, of teen sexual attitudes.

Lipkins says that prosecuting kids for sexting behavior is a misguided approach to a new problem that's best solved the old-fashioned way: by communicating with your child about risks and teaching responsible behavior. “Parents have to talk about sexting behavior as part of other behaviors, and really try to have kids learn how to navigate this world without us, because we're not going to be around forever,” says Lipkins. “We want kids to learn how to make healthy decisions on their own.”

Want to keep your child safe from sexting and its consequences? Here's how to help:

Parents should see sexting not as an isolated trend, but as a new expression, fueled by technology, of the social and sexual experimentation that has always characterized adolescence. That means that the best way for parents to keep kids safe is still to send a message of their own, which emphasizes responsibility, explains the risks, and keeps the lines of communication open.

Next Article: The Need for Speed: Sweet 16 and Safe Driving
We enable strictly necessary cookies to give you the best possible experience on Education.com.Cookie policy