College in Canada? Why American Students are Heading North after High School 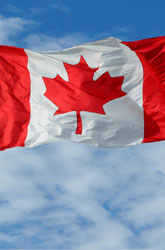 You may have heard that more and more American students are heading to Canada after high school. News reports on this trend often trumpet the fact that Canadian universities offer a quality education for a fraction of the cost of a college degree in the United States. But is college in Canada really as viable and economical for American students as it seems?

According to the Canadian embassy in Washington, D.C., an estimated 10,000 Americans are pursuing degrees in Canada, up from about 3,500 10 years ago. Canadian officials see this as a way to build a strong connection between the two countries and enhance the international profile of Canadian universities. Representatives from Canadian universities appear at college fairs in American cities from Atlanta to Seattle, and the embassy says they plan to add more stateside stops to their recruiting trips.

There are advantages for Americans, too. Many Canadian universities (north of the border the word "college" usually refers to schools focused on vocational coursework) have a reputation for strong academics, earning recognition from institutions like the college-ranking juggernaut U.S. News and World Report. And Americans who study in Canada can stay relatively close to home while getting the experience of living in another country. This is especially true in the French-speaking province of Quebec.

Many Americans pursuing degrees in Canada look to the north because of the significantly lower price tag. For example, a year at Simon Fraser University in Burnaby, British Columbia, costs a foreign undergraduate student about $12,000 in American dollars. Compare that to yearly U.S. university fees that can run the average undergrad around $25,000 - just to start.

"Parents are always shocked at how much less expensive it is," says Yusuf Varachia, international recruitment coordinator at Simon Fraser. Students and parents have become accustomed to the idea of paying through the nose for a good college education.

But Kathleen Massey, registrar at McGill University in Montreal, notes that Canadian universities aren't necessarily less expensive than those in the U.S. McGill estimates that foreign students could pay up to $44,000 in American currency for a year of tuition, fees and other costs.

"When we're promoting McGill, what we're promoting is the quality of the educational experience, regardless of price," Massey says, adding that many of the Americans considering McGill have heard about the university from friends or family.

If you and your soon-to-be college student are considering Canada as an option for higher education, here are some pointers:

Find the Right Canadian University for You

While there are some differences between the U.S. and Canada, students and parents pointing their college searches north of the border have to consider schools based on the same criteria they'd use in the States - like whether your child would rather live in a big city or small town, or if she's interested in any particular subjects, clubs or sports.

Varachia suggests visiting a campus and talking with current students and faculty. If your child knows what he wants to study, academic departments' websites offer a wealth of information about faculty members' backgrounds and research. Approach researching Canadian colleges the same way you'd look at any college.

Canadian universities might also appeal to students who aren't looking forward to submitting reams of paper and thousands of words with every college application. Even top Canadian universities like McGill and Simon Fraser don't require documents like application essays and letters of recommendation. Instead, they weigh class grades and test scores to decide who gets accepted.

"We're basing our evaluations on their senior-level courses and their grades," says Varachia of Simon Fraser, which allows applications as late as April 30 for the following fall.

That might seem especially late to Americans familiar with the Universal Reply Date of May 1, the deadline for students in the U.S. to tell colleges where they plan to enroll come fall. However, Varachia advises American students to turn in their applications by Feb. 28 so they can hear by May 1 whether they've been accepted.

Still, Americans do have some extra paperwork to fill out if they go north for school. Canada's government requires foreign students to get study permits, for which they also need proof of being able to support themselves financially. Students going to Quebec also need a Quebec Certificate of Acceptance.

Financial aid from the U.S. government can also go toward the costs of a Canadian university, Massey says. Like American schools, Canadian institutions also offer merit scholarships and aid packages, often referred to as bursaries, for students who need financial help.

The best way for American students to make the most of their time at a Canadian university is to stay open to new experiences, Massey says, and venture off-campus during breaks from rigorous study.

"American students and their parents see Montreal as kind of a European experience within North America," she says, adding that students don't need to learn French before arriving at McGill.

And the weather in Quebec is colder than some Americans are used to, so Massey cautions students from southern climates to bring plenty of warm clothes.

There are great resources on the Internet that help make making a decision easier. Here are a couple:

Association of Universities and Colleges of Canada: Learn about different types of Canadian schools. Search among 95 schools by major, province and degree program.

Whether your child decides to stay stateside or head north for College, it's important to weigh all of your options when it comes to college and your child's future. Canada might just be the new frontier in U.S. higher education.

Next Article: Should You Host a Foreign Exchange Student?
We enable strictly necessary cookies to give you the best possible experience on Education.com.Cookie policy