Log in with different email
For more assistance contact customer service
Outside the Classroom
Cyberbullying Statistics: What the Facts Mean for You

Cyberbullying Statistics: What the Facts Mean for You 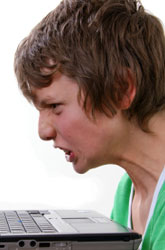 These days, it's difficult to find anyone, young or old, without personal ties to the world-wide web. Your kids may chat with their friends online more than they chat in person. And you may even have a Facebook profile too—much to your teen's dismay. While online connections are often a harmless way to stay in touch, cyberbullying statistics reveal a darker side to the Internet. It has become a place where kids can be ruthless with words, and even torment each other, protected by online aliases and the lack of any authority who's responsible to intervene. Even children that are technically too young to participate are affected by online bullying; a May 2011 study by Consumer Reports indicates that 7.5 million U.S. Facebook users are under the age of 13, the age cutoff for the popular social site.

If you think cyberbullying doesn't affect your child, think again. A survey by i-Safe Inc., an independent e-safety firm, found 58 percent of children reported that someone has said something mean or hurtful to them online, and one in four have had it happen more than once. The numbers are clear: most kids have faced some type of cyberbullying.

Kids sometimes stay hush-hush about bullying to parents, so it's important that you look for telltale signs. Julie Emmer, Director of Outpatient and Clinical Education Services for Seminole Behavioral Healthcare, warns parents that changes in their child's behavior, including depression, new anxieties or a reluctance to use the computer could be red flags of online harassment. Pay attention to your child's behavior, and talk to her if you notice bullying victim symptoms.

In 2010, Phoebe Prince took her life at age 15 after being severely bullied online by a group of students at her high school, making her the most recent in a slew of high-profile suicides stemming from bullying incidents. Victims who survive the online ridicule often suffer from severe depression, panic attacks and other stress-induced consequences later in life.

When it comes to cyberbullying, it's often the victims who rightfully get the most attention. However, pinpointing perpetrators' motives could shed light on why children tease each other. i-Safe points out that 53 percent of kids have said something mean or hurtful to someone else online, meaning more than half have participated in online bullying. Chances are, your child has too.

It's hard to catch your kid in the act since much of cyberbullying is done anonymously. The anonymity afforded by the Internet makes kids often feel bolder, acting out in ways in cyberspace that they never would in the real world. Watching for signs that your teen is a bully gives you a better idea of her online activities. According to Emmer, an online bully typically has a hot temper, has superiority issues, struggles with conflict resolution and spends time with peers who also bully.

If Your Child is the Victim

If Your Child is the Bully

Whether you're the parent of the bully or the bullied, it's in your power to stop the behavior and protect your child. By keeping tabs on your child's online behavior and the latest cyberbullying statistics, you'll know what's going on in the world of Facebook, MySpace and Twitter to react appropriately. Getting in tune with your teen's online habits now can save the hurt, shame, and punishment that stem from cyberbullying.