Log in with different email
For more assistance contact customer service
Outside the Classroom
Eastern Asia: History, Culture and Tradition 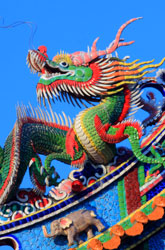 The temples of Tokyo, the Great Wall of China, the coastlines of Korea, and the steppes of Mongolia… When many people think of Asia, they think of Eastern Asia, which the United Nations defines as the region containing China, Taiwan, Japan, North Korea, South Korea, and Mongolia. Geographically, Eastern Asia covers about 4,600,000 square miles (12,000,000 kilometers), which makes it about 15 % bigger than all of Europe. But more than 1.5 billion people live within its borders. That’s more than 1 in 5 people in the world!

A large portion of Asian Americans can trace their roots to this area. Want to spark some conversation? Here are some facts about each of the countries in this region.

In terms of population and geography, the biggest fish in the region, by far, is China. In fact, China is the world’s most populous country, with 20% of the world’s population: over 1.3 billion people. Geographically, only Russia, Canada, and the US have more land, and China has a huge variety of geography—from towering mountains to flat plains. Its southern regions are tropical, while some of its most Northern reaches are subarctic. China is one of the world’s oldest civilizations, with more than 40 centuries of culture, philosophy, and tradition under its belt. From magnificent dynasties like the Han, to the fall of the last Chinese emperor in the early 20th century, to Japanese invasion and the rise of Communism, China has a rich and diverse history. The calendars, writing, religions, and cultures of many other Eastern Asian countries have roots in China.

When Americans think of Japan, they often think of the cars or electronics it produces. But while the country is famous for its modern gadgets, it’s grounded in age-old traditions and a rich culture passed down through the generations. From the rituals of the tea ceremony to the meticulous care of the bonsai, Kabuki theater to ancient temples, this nation of islands is steeped in traditions, and it was isolated from the rest of the globe for most of its history. Unlike many of its neighbors, who were invaded multiple times, no country successfully penetrated Japan’s borders until World War II. Japan’s main religion, Buddhism, and its writing, both came originally from China, but Japan resisted outside influence for most of its history, which helps explain why its culture has remained so strong.

In the heart of Asia, with China on one side and Siberia on the other, landlocked Mongolia is the most sparsely populated country in the world. Nomadic empires have ruled Mongolia for centuries, including Genghis Khan, who founded the Mongol Empire in 1206. Even today, about 30% of the country’s population is nomadic or semi-nomadic. Much of the country is covered by steppes, with beautiful mountains to the north and the Gobi Desert to the south. Mongolia has short hot summers and extremely cold winters. Some parts of the country don’t get a single raindrop in an entire year and very little of the land is arable.

South of China, but just north of Japan, Korea has been invaded by both, in addition to Manchuria and Mongolia. In fact, the country has been batting back invaders for most of its 5,000-year existence.

As of World War II, Korea was one nation that had been occupied for 35 years by Japan. But at the close of the war, the country was divided in half. The Soviet Union was placed in charge of the northern half, and the U.S. was to oversee the South, with the idea that the country would eventually be reunified. Instead, Soviet-backed troupes eventually invaded (in 1950), pushing into South Korea. An armistice was signed three years later, but the peninsula is still formally divided into North Korea and South Korea—two separate countries with a Demilitarized Zone (DMZ) between them.

While both countries were accepted into the United Nations in 1991, North Korea withdrew from the armistice in 2009. The country is a single party state and officially a socialist one. Kim Jon-il, the son of Eternal President Kim Il-sung, currently rules it. North Korea is almost completely sealed off to outsiders.

South Korea is a democracy. Close to 70% of the country is mountainous, but South Korea is also known for its beautiful beaches—the country is surrounded by stunning coastline. While many people think “Seoul” when they hear South Korea, the country is more than its bustling cities—in fact, it has some of the most gorgeous national parks in all of Asia. The country has ancient temples and shrines, traditional teahouses, colorful festivals, and bustling lively markets, ripe for exploration.

This lush island off the coast of mainland China may not be as famous as its bigger neighbors, but its lush subtropical climate, beautiful mountains, hidden hot springs, and pulsing cities make it a study in contrasts. It is one of the most densely populated places in the world.

There’s evidence of humans living in Taiwan as far back as 30,000 years ago, but the Portuguese claimed to have “discovered” Taiwan in 1544. The sweet potato shaped island has been ruled by a variety of conquistadors: the Dutch, the Spanish, and the Japanese, among others. After World War II, Taiwan was wrested from the Japanese and given to China, but soon, civil war broke out on the mainland, and Chiang Kai-shek fled to Taiwan, followed by a stream of soldiers, intellectuals, and others who did not want to live under Chairman Mao and his Communist party.

The first Chinese Americans arrived in America as early as 1820, but it was the California Gold Rush that opened the floodgates in 1848. Chinese laborers mined for gold and other precious metals, and were also instrumental in building the western half of the Transcontinental Railroad. Immigration came to a virtual standstill with the passage of the Chinese Exclusion Act in 1885, which prohibited entry for Chinese laborers and discriminated against Chinese in general. It lasted almost 50 years.

Korean and Japanese laborers first came to America in the late 1800’s to work in the sugar and pineapple plantations of Hawaii, and, to a smaller extent, as sharecroppers on the West Coast of the mainland. Because interracial marriage was strongly discouraged in these communities, picture brides became a common practice during this time. The Immigration Act of 1924 halted almost all immigration, but another wave of Korean immigrants came after the Korean War. In fact, 1 in 4 Korean Americans can trace their routes in America to a relative who came over as the wife of an American serviceman.

On February 19, 1942, President Roosevelt signed an Executive Order, condemning Japanese Americans to internment camps for the duration of World War II. Despite this treatment, Japanese Americans formed the all-volunteer 442nd Regimental Combat Team, which became the most decorated military unit in U.S. history, with over 9,000 purple hearts between them.

Want to get hands-on with a lesson on Eastern Asia? Try these activities and printables: