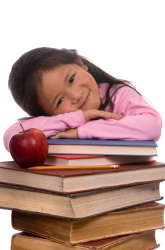 Teacher Esme Raji Codell has sifted through thousands of books as a children's literature specialist and author of the parent's guide, How to Get Your Child to Love Reading (Algonquin Books, 2003). Here are her top 5 picks for grades kindergarten through fifth grade, plus a list of recommended authors for good measure:

Hint: Reading early doesn’t mean reading better! Take your time and savor the world of picture books. Here's a list of books to get started:

Hint: Turn on the closed-captioning feature of your television set to expose your child to sight-word vocabulary, even when you aren’t reading from books.

Hint: Don’t fear series books!  Most lifelong readers have these on their reading menu as children.

Hint: Non-fiction is real reading, too!  Mix in magazines, cookbooks, the sports pages and biography to make reading a real-world activity and not just homework, and to keep reluctant readers in the swim.

Next Article: Characteristics of Good Biographies
We enable strictly necessary cookies to give you the best possible experience on Education.com.Cookie policy