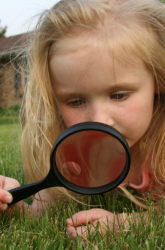 In early elementary school science seemed to be just fun experiments, but in fifth grade students start measuring, counting, predicting, and recording. Though there will still be plenty of interesting experiments, now your fifth grader is expected to remember science basics and be able to predict what the outcome of an experiment will be.  By understanding the basics of what fifth graders will learn, you’ll be able to help your child with her homework. Fifth grade science varies from state to state, and even school to school. If you want details about what your child will learn look at your state’s science standards or ask your child’s teacher.  Generally, by the end of fifth grade, your little scientist should be able to:

Although your child may never become a scientist, understanding the basics of science can help foster a love of learning and curiosity.  So ask your child questions about how everything works and don’t hesitate to put on some goggles and make that model rocket.

Next Article: Talking About Trees
We enable strictly necessary cookies to give you the best possible experience on Education.com.Cookie policy