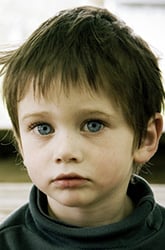 No two children with Asperger’s Syndrome are alike. Because it’s on a spectrum, there are subtle differences between each case, making diagnosis difficult, and misdiagnosis worryingly common. Early intervention is the number one way to help kids function, so it’s important that parents stay informed about key indicators.

Keep in mind, however, a child who has some of the red flags mentioned doesn't necessarily have Asperger’s. Diagnosis is a job for a doctor; these are some guidelines for parents to be aware of.

Here are five questions parents should ask themselves:

1. How does my child play with other kids?

Doctors now say this is the fundamental question when dealing with a child who may have a developmental disorder.

Pretend play is typically much more difficult for kids with Asperger’s. Abstract and creative thinking do not come naturally to them. So instead of imagining a play scene, a child with Asperger’s will often quote lines from movies, books or TV shows, usually verbatim. Many parents mistake the play-acting for “rich pretend play” because they hear the extensive vocabulary and the intricate dialogue.

Parents may also misunderstand their child’s play at home, which is very different than on the playground. They tend to assume that if their child plays fine at home, then he must play fine with the other kids too. But adults tend to follow their own kids, and will cater to their needs during play.

“Try to imagine playing with them like a 5-year-old, not like an adult,” advises Dr. Laurie Leventhal-Belfer, licensed psychologist, “and see how things go when you want to change things in their play.”

Test your child’s reaction to change in play by bringing in a new character to the scene, or tell him you want to play with different toys. This will be very difficult for children with Asperger’s. They are accustomed to routine, and often melt down in the face of change.

The “perfectionist” characteristic is very common in Asperger’s children. Many of their mannerisms are similar to those of OCD, and can be seen during play, for instance, when a child always lines up his blocks in alphabetical order or largest to smallest.

2. What kind of conversations does my child have?

Verbal dialogue is another key indicator. Children with Asperger’s tend to have one-sided conversations with their peers. The conversation will either be led solely by the Asperger’s child, or it will end abruptly.

“We have children who, all they want to talk about is their area of interest,” explains Dr. Alice Locke Chezar, MFT, ATR, family therapist, “and they know it inside out and backwards. It could be science, or cars, or the year before that it could have been dinosaurs. He could go on for 15 minutes in great detail.”

Asperger’s causes children to speak with only concrete, intellectual vocabulary about topics that they’ve learned. Small talk remains a foreign concept to Asperger’s kids. They must work with speech and language pathologists, and are essentially trained how to have normal, everyday conversation.

In fact, this characteristic is common between almost all the developmental disorders. But Asperger’s kids do not have typical speech delay; they simply do not see the need to converse or interact with other people.

3. Does my child seem academically gifted?

Many parents of kids with Asperger’s initially think their child is gifted or brilliant, without realizing that there may be something else going on.

Having a specific area of interest is one of the most common characteristics of Asperger’s. Children will only become talkative when their area of interest is brought up, usually with adults. These children tend to have very high IQs, and excel in math and science—the concrete, non-abstract subjects.

When Leventhal-Belfer first started working with Asperger’s kids, she had a 4-year-old say, “Dr. Laurie did you get stock today? The market is going up.” Was this small child well versed in the stock market? No. Turns out, his father was a stockbroker. He could easily repeat things he’d overheard his father saying.

Because Asperger’s children have great memory and are hyper-focused, they tend to excel in school, and many of them fall between the cracks because their main struggle is with social interaction.

4. Can my child tolerate losing?

Many people associate violence and tantrums with Autism, and while children with Asperger’s do have meltdowns, they tend to be sweet, loving kids on an everyday basis. The majority of their temper tantrums occur because of change. If someone is not playing by the rules in a game, or if someone disagrees with the child on their topic of interest, a serious eruption could occur.

“Often these kids have tremendous meltdowns, which all kids do to some extent,” says Leventhal-Belfer, “but these go on for quite awhile, to the extent that parents often allow their child, a five-year-old, to win.”

To avoid a tantrum, many parents will play by their child’s rules. But that doesn’t help the child cope in the real world. For example, kids with Asperger’s tend to be overly critical of others, and may carry these habits into adulthood if they do not get the intervention and training to help them deal with change.

Change will always bring about anxiety in children with Asperger’s, but the anxiety is not the root of the problem.

This is one of the earliest warning flags for both Autism and Asperger’s.

“If you look at a baby, and you look into their eyes, they follow you,” explains Leventhal-Belfer, “So you have social dances, social interactions since birth.”

This idea of eye contact is not natural to kids with Asperger’s. Even the small, subtle gestures of communication, such as a nod or a smile during conversation have to be learned.

When they are off in their own world, looking at the plants or the ceiling, they seem distracted. Often they fidget, like ADHD kids, but the fidgeting with Asperger’s is a result of change or a new environment.

It's important to note though that there are many children who exhibit some of these characteristics that do not have Asperger's, and similarly many children who may be on the spectrum, but do not exhibit any of these traits. This list is merely meant to be a guide to help parents if they are unsure if their child has Asperger's. Of course, if you have any concerns about your child, relating to Asperger's or otherwise, you should always consult your pediatrician first.

Next Article: Social Stories, Social Scripts and the Power Card Strategy
We enable strictly necessary cookies to give you the best possible experience on Education.com.Cookie policy