Guys and Dolls: Reducing Gender Stereotypes in Your Home 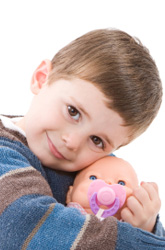 These days, it's practically a cultural habit to hand your son a toy car and buy your daughter dolls to play with, perpetuating the gender stereotypes that society deems as "normal" for girls and boys. But what happens if your son would rather dress to the nines in play clothes, and your daughter obsesses over action figures?

A 2009 study from psychology research journal "Sex Roles" found that 31 percent of "girl" toys are marketed toward a girl's appearance, such as plastic make-up and princess dresses, while 46 percent of "boy" toys appeal to a boy's traits and activities, such as a chemistry set or a football. Essentially, these gender-biased playthings teach children to define a girl based on her looks, while describing a boy based on his actions.

The same study shows that children begin to understand gender roles early—as young as 30 months of age! Children ages 3 to 5 experience an increased awareness of themselves and world around them. Even toddlers can harbor certain opinions about what boys and girls should do, and may reject formerly beloved toys because of it.

Doug Gertner, Ph.D, also known as "The Grateful Dad," says, "When we send or support messages of idealized gender—tough, unemotional, driven boys, and demure, passive, dependent girls—we are not offering our children the opportunity to be themselves." Instead of forcing boys to shoot Nerf guns and girls to coddle baby dolls, remove the issue of gender roles and stereotypes in your home by allowing your child's imagination to run wild without gender-biased toys.

The real trick to reducing gender stereotypes in your own family is to relax and allow your child to lead. You already have control over her diet, wardrobe and schedule; you can't also shape her interests and preferences. Expose your child to a range of toys, activities and interests and she'll create her own path, fostered by your fantastic parenting skills.