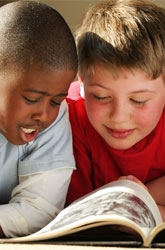 It’s February—and in Canada, the powder will fly as athletes from around the globe vie for the gold at the 2010 Vancouver Games. These seven books will help preschoolers and preteens alike get their heads in the game and warm up to the Winter Olympics.

Tacky and the Winter Games, written by Helen Lester and illustrated by Lynn Munsinger (Sandpiper, 2007)

His friends’ names—Goodly, Lovely, Angel, Neatly and Perfect—sum up everything there is to know about the loveable mess that is Tacky the Penguin. In this adventure, Tacky’s friends are training (“As in, choo-choo?” he asks hopefully) for the Winter Olympics, and though the befuddled bird sleeps through workouts and gobbles down pizza while his teammates pick at their spinach, he still manages to shine in his own special way. Children will love the uproarious illustrations and enjoy seeing the trappings of the winter games from the torch lighting to the medal ceremony. For grades K-2.

Young fans of extreme sports will love this series by Laban Hill. In book 7, Spiked Snow, Nat, Jamil, Wall and Kevin are ready to hit the slopes and enjoy the Winter X-Games, but the spectators become participants in a dangerous web that leaves more than a few moguls in their path. Is someone trying to sabotage the games? This story is heavy on adventure and mystery and will appeal to preteen boys. For grades 3-6.

When Mrs. Wushy announces a first grade mini-Winter Olympics, the game is on! Freddy Thresher, resident shark expert, bets bully Max that he can win the snowshoe race—despite the fact that he’s never even put on a snowshoe in his entire life. A week’s worth of desserts is at stake in this funny childhood take on the Winter Games. Abby Klein brings her experience as a first grade teacher to Ready, Set, Snow!, number 16 in the “Ready, Freddy” series. For grades K-2.

Children can use crayon or water-based marker to write on the pages of this Winter Games-themed book that combines winter sports with pre-K readiness skills. Featuring a familiar cast of characters that includes Elmo, Zoe and friends, kids can work through counting and mazes as Sesame Street takes to the snow and ice. For pre-K.

How the Skunk Learned to Jump, written by Stephen Schumann and illustrated by Penniann Schumann (Cedars Press, 2009)

In this true story, 5-year-old Stephen, or “Skunk,” discovers a passion for ski jumping and begs his parents for lessons at the Utah Olympic Park. The intrepid jumper then decides to begin training in earnest for the 2018 Olympics. Young Stephen Schumann and his mother Penniann wrote the book when he was six, as there were no other kids’ books on Nordic ski jumping in the local library. This book about following your dreams is sure to be a winner for like-minded kids everywhere. For grades 3-5.

Getting in the Game, written by Dawn FitzGerald (Square Fish, 2007)

Sports fiction for girls is a largely underrepresented genre, and any kid sister who grew up in the shadow of a hockey-playing older brother can appreciate this story of seventh grader Joanna, or Jo, a girl more at home in pads and a helmet than sequins and sparkles. Hockey features prominently in the first half of the book, but then the author delves into the heroine’s other life issues—her grandfather’s Alzheimer’s, her parents’ separation. “I just wanted to get in the game,” Jo says, and she does just that. For grades 4-7.

What do a half-orca, half-Kermode bear, a sasquatch, and a “guardian spirit” with the legs of a bear, the wings of a thunderbird and a whale hat have in common? They’re Miga, Quatchi and Sumi, the official mascots of the 2010 Vancouver Games. Miga snowboards, Quatchi dreams of being a goalie, and Sumi wants to learn all the Paralympic sports—and all three of them are excited to represent their country this winter. The appealing bluish-green palette and chunky illustrations make this a fun introduction to the Winter Games for young children. For grades K-3.

So curl up with a cup of warm cocoa and catch these great winter reads—then tune in to the 2010 Vancouver Games and cheer on your favorite athletes!