Log in with different email
For more assistance contact customer service
School and Academics
Books Based on Subjects
Great Books to Kick Off the Olympics!

Great Books to Kick Off the Olympics! 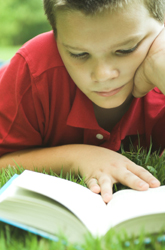 Summer is here, bringing with it picnics in the park, lazy days at the beach and reading for fun. Now your child is free to read whatever she wants, whenever she wants, rather than having to read for school. And not only is it more fun, but reading during the summer months also keeps a young reader sharp. “Experts agree that children who read during the summer gain reading skills, while those who do not often experience learning losses,” says Carol H. Rasco, president and CEO of Reading is Fundamental (RIF), a nonprofit organization promoting literacy.

Reading can be a great complement to some of the exciting activities taking place during the summer months. Vacationing somewhere famous? Find a great book that takes place there. Is your kid nuts about Batman? Get a hold of the comic books.

There's another big event happening this summer: the London Olympics! There are tons of great books about Olympic sports to whet your child's appetite. Here are a few suggestions:

Salt in his Shoes by Deloris Jordan -- Ever wonder what Michael Jordan was like as a boy? This charming story is written by his mother and sister, about a time when he lost a basketball game and wished he could be taller. Can salt in your shoes really make you grow?

Wilma Unlimited by Kathleen Krull -- Once called “the fastest woman on Earth,” Wilma Rudolph overcomes childhood polio and goes on to win three gold medals in this dramatic and inspiring true story.

Hour of the Olympics by Mary Pope Osborne -- Adventure ensues when Mary and Jack discover a tree house that time warps them back to the very first Olympic games in Athens, Greece. But to Annie's surprise, women are not allowed to compete in the games.

Long Shot by Timothy Tocher -- When Laurie’s family moves out of town, she has trouble adjusting to a new town, new friends and a new, frustrating basketball team. But with understanding and a quirky new friend, she finds she can be a winner on and off the court.

Heat by Mike Lupica -- Twelve-year-old Michael throws pitches with serious power. But the heat of the game is nothing compared to his secret. An orphan and a Cuban refugee, Michael must face the fire when skeptical Little League officials demand to see his birth certificate.

Rush for the Gold: Mystery at the Olympics by John Feinstein -- This sports mystery follows swimmer Susan Carol as she tries to claim Olympic gold while also dealing with being a celebrity and a slew of outside pressures.

The Outside Shot by Walter Dean Myers. When Lonnie Jackson leaves Harlem for a basketball scholarship at a Midwest college, he knows he must keep his head straight and his record clean. That's the only way he'll have a chance of making it to the pros someday.

Open Court by Carol Clippinger. Hall Braxton takes no prisoners on the tennis court. She is nationally ranked on the junior circuit, and her parents want to send her to a tennis academy that churns out professional players. But Hall isn't sure she's ready to devote her entire life to tennis.

Whale Talk by Chris Crutcher. TJ is a smart, athletic, adopted teenager who shuns organized sports and the gung-ho athletes at his high school, until he agrees to form a swimming team and recruits some of the school's less popular students.

Next Article: Drop Everything and Read!
We enable strictly necessary cookies to give you the best possible experience on Education.com.Cookie policy