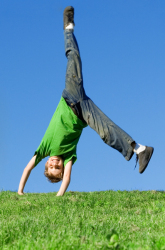 It's not out of order for a child to want to play hard, laugh hard, wrestle, climb, and explore! As our society has moved towards passive consumption and entertainment, places where children can safely move, make noise and play on the wild side have disappeared. At the same time, society’s definition of what’s “normal” for children has narrowed considerably, making life hard not just for the very active child, but for all children who might like to explore through movement and “hands-on” learning.

Often, though, a child’s activity level has its origin in early struggles. Unfortunately, his energy level can make parents become more distant, when they should be closer than ever. Well-intentioned grownups usually want very active children to act like they are someone else: to calm down, to keep their hands to themselves, to stop doing what they're doing. But parents should remember that the more times an active child hears, “Stop it,” the more isolated she becomes.

It may seem counterintuitive to embrace your child’s activity appetite, but it works! Playing with your child gives him reassurance, and helps him feel understood. Try going with his energies, instead of against them, and watch him turn from a tense ball of energy to a happy and relaxed child.

Begin by setting up “Special Time,” during which you explicitly say, with enthusiasm, “For (this many) minutes, I’ll play whatever you want to play!” Most of us can wrestle, chase, climb, jump, catch flying bodies, or be “frightened” by a hidden child jumping out from behind the closet door for ten minutes at a time. Your child will be delighted that you’re joining him at his energy level.

Active physical play can create the opportunity for tension release for your child. In fact, a very active child may carry emotional stress that drives his relentless energy. The laughter and physical bumping, wrestling, and knocking around that takes place during “Special Time” help active children find a healthy outlet for the tensions that may have shifted their young systems into overdrive. Play, laughter, and the adult’s permission to be oneself can heighten a child’s sense of emotional safety.

Set limits on out-of-bounds behavior, but listen to how your child feels about them.

Because very active children have been told so many times to stop, slow down, do this and do that, they become deaf to spoken limits. Setting limits works best without words: just go to your child, put a friendly but firm arm around him, and physically stop him from doing the out-of-bounds thing that’s not working. When you drop the yelling, orders, and criticism, but concentrate on moving close and paying attention to him, you’ll have more energy for listening, and your child will open up to you.

Instead of trying to “fix” external patterns with rewards and punishment, try bringing your energy and caring toward the child who lies, perhaps a bit frightened and isolated, beneath the intense and active surface.