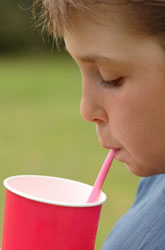 Researchers found that rats who consumed high-fructose corn syrup (HFCS) gained significantly more weight than rats who consumed simple table sugar, even when the overall caloric intake of the two groups was the same. Moreover, long-term consumption of HFCS led to symptoms such as abnormal weight gain and a rise in circulating blood fats called triglycerides, symptoms indicative of a dangerous condition in humans known as metabolic syndrome. The bottom line is that rats that consumed high-fructose corn syrup at levels well below those in soft drinks, got fat. Really fat.

“I have long suspected that the amount of high-fructose corn syrup in our diet is harmful” says Dawn Swidorski, Public Outreach Director for the Defeat Diabetes Foundation. “Researchers have found that the body does not metabolize HFCS in the same way it does other sugars – for example, we metabolize table sugar better.” Both high-fructose corn syrup and sucrose (table sugar) contain the simple sugars fructose and glucose.

The difference is in the chemistry: While sucrose is half fructose and half glucose, HFCS has a slightly higher amount of fructose than it does glucose, and also contains a small amount of a third, larger sugar molecule known as higher saccharide. Perhaps more importantly, as a result of the manufacturing process, the fructose molecules in HFCS aren’t bound to a corresponding glucose molecule, as is the case in sucrose. The fructose molecules in HFCS are therefore ready to be absorbed in the body and utilized right away, without going through the extra metabolic step that takes place when the body metabolizes sucrose. The researchers at Princeton find this missing step worrying.

In fact, this new research, coupled with a staggering increase in the consumption of soft drinks over the last 30 years, has a lot of people worried. Swidorski reports that between 1977 and 1996, soft drink consumption for children ages 2-8 years old increased 83%. That means an increase of more than 120 calories per child, per day, (and most of those are empty calories). “This isn’t surprising when you consider the fact that the availability of soft drinks in the U.S. greatly exceeds the availability of milk,” says Swidorski.

The fact is, the drink of choice for kids these days is overwhelmingly that of the sweetened variety, with teenage boys leading the pack, one third of them drinking at least 3 cans of soda a day. Meanwhile, obesity rates among children have more than tripled. Coincidence? The folks at Princeton think not.

Susan Levin, Director of Nutrition Education for the Physicians Committee for Responsible Medicine (PCRM), says avoiding high-fructose corn syrup is part of a greater shift that needs to happen in the way America feeds its children. “There’s no one thing wrong with the American diet. There’s a lot that’s wrong with the American diet.” Levin urges to not lose sight of the bigger picture. “What’s needed is a more holistic awareness about food and nutrition,” she says.

What Parents Can Do

The bottom line is that high-fructose corn syrup is empty calories. “There’s no reason for it to be in our foods,” says Swidorski. So snack healthy, eat at home with the family when you can, and eat smart. The results will be satisfyingly sweet, all on their own.