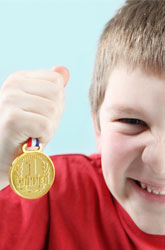 It's the Winter Olympic Games; time to get in on some of the action! Your child will love planning an Olympics-themed party for her friends that involves crafts, contests, and awards for their accomplishments.

Prepare Snacks for the Performers Celebrate this year's host country with a monumental meal: maple-leaf pancakes. Baking up a batch of these tasty treats will introduce children to some kitchen basics, while improving their understanding of measurements—an important math skill!

Dedicate a breakfast side dish to the United States with a red, white, and blue yogurt parfait. Simply layer blueberries, raspberries, and vanilla yogurt in small glass bowls. If desired, add a little granola. The berries, yogurt, and crunch make for a naturally sweet, delightfully nutritious combination.

Launch the Opening Ceremonies Encourage each of your child's friends to choose a country to represent, using the Internet as a resource. A quick search for participating countries should yield more than enough choices. After kids have made their decisions, challenge them to create a world flag's banner. They'll love celebrating multiple participating countries, and it's a great opportunity to discuss the importance of unity and solidarity, despite the focus on competition.

Show your Olympian and her friends how to craft their own Olympic torch, one of the most recognizable symbols of the Olympic games. You'll also be working a bit of history into their craft hour; the legacy of this blazing emblem dates back to the first games that took place in ancient Greece.

Let the Games Begin! Ask your child and her friends to choose a few Olympic events that they can't wait to watch, and brainstorm ways that these games can be brought indoors. Here are some ideas:

Indoor Speed Skating Have skaters wear their most slippery socks, and place a line of painter's tape on the hardwood floor. (Just make sure there's lots of open space, free of furniture and breakables.) Line kids up behind the tape, and invite them to get a running start. See how far they can slide, and mark their results with a small piece of tape bearing their initials. The giggles are bound to erupt as they glide across make-believe ice.

Tabletop Curling Save up some juice bottle tops, and take on this shuffleboard-style team game. Kids shoud pair off into two player teams, each with their own unique bottle top "curling stone." The object of the competition is to slide the stones toward the target—known as the "house," a 2-by-2 inch square of tape at the end of the table. One player on each team should flick the bottle cap across the table, while the second player—the sweeper—blows the cap toward the target. Name a winning team by asking kids to decide which bottle cap is closest to the middle of the target.

Make Your Own Medals In your at-home Olympic Games, everyone's a winner! Guide them through an award-making activity that celebrates their good sportsmanship. All they need are some old cereal boxes, gold paint, and ribbon or yarn. They're perfect for a closing ceremony in which kids congratulate each other on their accomplishments—and these gilded gold medals make great party favors!

One Last Sweet Treat After a long day of activities, kids will probably be ready for a thirst-quenching refreshment. Combine a bit of scientific experimentation with a colorful treat with these homemade snow cones—a chilly confection that's sure to please! This patriotic project invites kids to create some sweet snow, and show support for their favorite country by adding colored flavoring.

Next Article: Meet the Mascots: Vancouver 2010 Winter Games
We enable strictly necessary cookies to give you the best possible experience on Education.com.Cookie policy