Log in with different email
For more assistance contact customer service
Physical Health
Should Junk Food Be Banned from Schools?

Should Junk Food Be Banned from Schools? 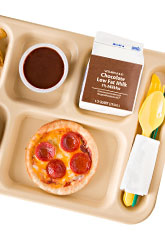 Another day, another junk food debate; from boycotting bake sales to banning sodas, many schools have joined the national fight against obesity.

An August 2012 study from Pediatrics made a startling discovery after following a group of school-aged children: kids who went to a school without junk food regulations maintained about a 37 percent overweight rate from fifth to eighth grade without budging. However, in schools with junk food regulations and bans, the number started at 39 percent in fifth grade and declined to about 18 percent by eighth grade. Of course, the results of the study beg the question: Should junk food be banned from schools altogether? Before you start petitioning your PTA, make sure you have all the facts and know how you, as a parent, can help.

It's an issue that might never have a concrete answer. While some love the idea of only healthy foods at school, others don't like the idea of government taking choices away.

So, what's a parent to do? First, you can start by getting involved at school and ensuring your child knows the difference between junk and the good stuff. Even if your little one noshes on a chicken nugget at school, it's the perfect time for a lesson on healthy options. Prepare her well and your child will have the tools to make better menu decisions in and outside of the cafeteria.