How to Keep Kids Engaged at the Passover Seder 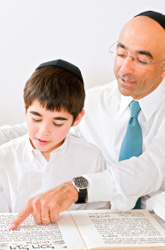 You sit down to the Passover Seder, and your four year old is already screaming about being hungry and bored. Your teenage daughter is rolling her eyes and texting under the table, and you catch a few of the adults thumbing through the pages of the haggadah and calculating how many pages are left until they can eat.

“An effective Seder is an extremely challenging proposition, especially with kids of different ages,” says Rabbi Apisdorf, award-winning author of The Passover Survival Kit. He believes that it is possible to keep kids engaged, however, parent's must make the effort to use their own creativity.

“Underneath it all, people want to have an enjoyable, meaningful Seder experience. By and large, however, they are not thinking the Seder can be that. So if all of the sudden you hit them with things that they’re not expecting, that can’t help but get a table going.”

But how can you get your eye-rolling teen and your hyperactive three year old – not to mention their aunts, uncles, and grandparents – excited about the Seder? Follow these five steps to make your Pesach Seder more memorable and fun for everyone.

Nothing important was ever achieved without putting a little time and effort into it. That means preparing both yourself and the rest of your family for the Seder will make everything easier in the end.

A week before Passover, spend just ten minutes at dinnertime or bedtime reading a book about the Exodus, or even reading parts of the haggadah, with your kids. Get them familiar with the storyline, making the story as dramatic as you’d like. Let them know that this year’s Seder is going to be a hit, and that the whole family is going to love it.

But when you’re in charge of the Seder, you have extra homework to do! Look through the haggadah yourself, and think about which parts you can make fun and interesting. (Ideas on how to do this to follow.)

Then look at the haggadah with a critical eye and come up with some thought-provoking questions that you think the kids would like to discuss. For example, consider the question “Why did God let us become slaves in the first place?” Remember that there is no correct answer to these questions, but they will be a springboard that children and adults can use to become more engaged in what they are reading at the Seder.

Who doesn't love prizes? We all know that prizes can make people (kids and adults alike) more engaged and motivated to participate in just about anything. It's important though, not to think of these prizes as bribes — think of them as a Seder table investment that motivates people to ask many questions as possible.

Get some big prizes for “wow!” questions, some medium prizes for good questions, and some small prizes for the questions that are asked just for the sake of the prize. And don’t forget to give out the prizes regardless of the age of the questioner – three years old or ninety three.

Rabbi Apisdorf likes to choose prizes for his Seder that are loosely tied into a theme of the Exodus. For example, one year he bought dozens of Hawaiian leis to symbolize the “freedom” that the Jews felt when they left Egypt. Another year, he bought dozens of tiny alien figurines to symbolize the fact that the Jews were strangers (i.e., aliens) in a strange land. People like to be rewarded, and kids love winning prizes. It doesn’t matter that the prizes aren’t intrinsically worth much; what matters is that kids and adults will have fun collecting them, competing for them, and joking about them during the Seder.

Give out the prize for the best questions asked at the Seder – but don’t forget to give out prizes for good answers as well! Good questions and good answers are the backbones of a good discussion, which is what your goal should be.

When you think of questions and answers at the Seder, you may imagine a quiz show in which the children need to prove that they remember all of the details of the Exodus. But that’s not the point at all. The goal of the questions and answers is to open up the table for discussion, not to quiz your kids on whether they remember the name of Moses’s wife or of the fifth plague.

So when someone asks a good question, take it and run with it. For example, when you read the words: “Now we are slaves; next year we should be free!” someone might ask, “But I’m not a slave. Slavery was outlawed a long time ago!” Rather than waxing eloquent about emotional slavery or about people who are still enslaved today, open the table for discussion: “Wow, that’s a great question. What do you guys think about that?” Even better, encourage specific participants to give answers when you think they won’t feel put on the spot.

“Discussions empower kids,” says Rabbi Apisdorf. “They make kids feel like they’re not just passive witnesses to what is going on, but active participants.” And beyond that, it gives them a chance to flex their thinking muscles and engage in thought-provoking topics.

Another way to make kids more active participants, especially when you have younger children at the Seder, is to reenact different scenes from the Exodus. For example, one family lined their walls with blue bedsheets, put on beards and costumes to make them look like the Jews when they left Egypt, and reenacted their own splitting of the sea.

A father from another family that loves playacting pretended to be Pharoah and harshly commanded his children to build towers out of blocks. He kept on knocking their towers down and commanding them to build it again and again. At the end, he brought his kids together and discussed how they felt, and compared it to how the Jews must have felt when Pharoah made them build structures on quicksand so that they could not even see the results of their labors.

It's important to realize that there are two ways that children learn from their parents: by listening to what they say, and by watching what they do. “Both of those are very much in play at the Seder,” says Rabbi Apisdorf. Do your children see a parent who's engaged in the Seder in a meaningful and fun way? Do they see a parent who is actually interested in what is being discussed? Or, as Rabbi Apisdorf quipped, “Is the parent giving off a message of, ‘Let’s just get through this as quickly as we can, so that we can have dinner. Oh, and don’t forget that the basketball game starts at 9:30!’ Parents have to realize that their attitude towards the experience is a very important component in how their children will experience it as well.”

In other words, get into it! You need to feel free to be creative, to try crazy things and see if they work. Sure, there is a haggadah to follow, there are customs to stick to, but it is important to use the concepts of the Seder as an opportunity to express your creativity and to have fun with your kids.

If you try out some of your crazy and exciting ideas, even the youngest kids at the table will never forget it. They’ll always equate “Passover Seder” with “fun,” which should be your main goal for such young kids.

Why is it so important to get kids involved in the Passover Seder? Who cares whether they view the Seder as a positive experience years down the road?

According to Rabbi Apisdorf, the main idea that you’re trying to get across to older kids – through asking and answering stimulating questions – is that the Seder can hold meaningful ideas that you can understand and apply to your own life. The haggadah isn’t just a book that we read once a year; it can be a springboard for some truly important family discussions.

Rabbi Apisdorf believes that the Passover Seder can truly be a turning point in your parenting journey: “One of the basic perspectives of parenting is that, as parents, we try to give our children the tools that they can then use the build their own lives." He compares it to the process of becoming an artist, a musician, or a scientist. “If you learn the basic skills, tools, and concepts, then the idea is not just to do what you’ve learned but bring your own creativity to those tools and create something that’s uniquely you.

“This is true about being a Jew and a human being,” he continues. “Passover is about the birth of the Jewish people, and the haggadah is an experience that contains in it many core ideas and values. So it’s not just that it’s a fun experience, it’s an opportunity for families to explore fundamental Jewish concepts, perspectives on life, and outlooks. If that happens year after year, these values become a part of their consciousness. With time, they will be able to build on those values and use them as they develop themselves as a person and as a Jew.”

The bottom line is that there are simple ways that you can make this year's Passover Seder a hit, and get the most of the experience while you're at it.

Next Article: The ABC's of Passover
We enable strictly necessary cookies to give you the best possible experience on Education.com.Cookie policy