Log in with different email
For more assistance contact customer service
Parenting and Families
Kids Room Chaos: What to Keep Out of Your Kid's Room

Kids Room Chaos: What to Keep Out of Your Kid's Room 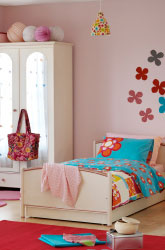 Once upon a time, your baby's room was stocked with soft, safe staples like a cushy change table and a nostalgic rocking chair. Of course, as he gets older, the change table is moved out in favor of a TV stand. And that rocking chair? It makes way for a box full of noisy toys. While you want your child to feel like his room is his private space, you might be fostering poor habits and bad behavior by allowing your child to keep certain items in his room. Make sure that a kid's room is a safe place—not one that gets him into trouble.

One of the most obvious no-nos is allowing your child to have a TV in his room. While it might not seem like a big deal at first (Hey, it gets you a few minutes of quiet time!), it could have some seriously detrimental effects on your child's health. A 2010 study from the Pennington Biomedical Research Center at Louisiana State University found that kids with TVs in their rooms were 2.5 times more likely to be overweight, while a 1999 study by the American Academy of Pediatrics found a link between kids room TVs and sleep disturbances. Sure, a TV might give you a few minutes of peace and quiet, but at what price?

Let's face it: Your child probably isn't equipped to make genius nutrition choices all on his own. That's why giving him constant access to food—especially junk food—in his room is a bad idea. Rhonda Franz, managing editor for ParentingSquad.com, warns against making a kid's room into a kitchen. "Besides the fact it's messy and unnecessary, allowing children to eat at will in their bedrooms sets up bad eating habits," she says. "Young children aren't conscientious enough to create their own boundaries with meal times and snack times, or cleaning up a mess." Can we say mice?

While you might not want your child's noisy toys lying around the house, think twice before you banish them to the bedroom. Sure, they might be out of the way, but they can also be mighty tempting to a child trying to get to sleep. "One of the worst things parents can do is decorate the bedroom to be a playroom instead of creating a calming room for sleep," warns child development expert Ingrid Kellaghan. "Before nap or bedtime, toys should be tucked away, stored and out of sight. When a child's bedroom is used for other activities, merely walking into the bedroom causes the brain to literally wake up because it automatically associates being in that room with mental alertness and fun."

"Go to your room!" Is there any parent who hasn't uttered these very words in a bout of frustration? While a child's room might seem like the natural place for discipline, it could create a problem for your child at bedtime. When his room is constantly used as a method of punishment, you might find your little one sneaking out to your bed in the night and resisting quiet time in his personal abode. Instead of disciplining your child in his room, try a neutral area instead. That way, your child's room becomes a safe haven instead of a torture chamber.

Here's another no-brainer for savvy parents. While you might want your child to have the best advantage when it comes to school and learning, leaving a computer in his room permanently can cause some serious problems. Even young children can be tempted by the lure of 24/7 games, especially after Mom and Dad hit the sack. What's more, without proper supervision or computer protection, your little one might wander onto websites not meant for little eyes. It's best to move a computer to a shared area of the home and create an atmosphere where it's only okay to use the computer when you're nearby.

Whether you have a toddler or a teen, no dependent in your house should be so independent that he needs his own private and impenetrable space. Besides the fact that a lock can be dangerous for younger kids who accidentally trap themselves in their rooms, you should always have access to your child's space. Does that mean spying and snooping? No, but it should mean that your child knows you could come in at any time for inspection.

Most moms know that silence is a double-edged sword. On one hand, it's that blissful sound that gives you a few moments to catch up on Downton Abbey. On the other hand, it usually means that your little one is occupied—for better or for worse. That's why you need to head into your child's room and do a once-over for anything that could be dangerous. Even a pair of scissors could become dangerous when your child learns that they cut hair, skin and anything else. Get down on the floor and check for danger at eye level. An unanchored chest of drawers, loose cord from the blinds and electrical sockets should all be taken care of so you can relish—not fear—a few minutes of silence.

Your little one's room should be a sanctuary for both of you. While the days of languid rocking in a chair might be long over, it can still be a place of storybooks, lullabies and kisses goodnight. By keeping excess stimulation and temptation out of your child's room, you might be able to snag a few more years of quiet moments before a raucous teen occupies the space instead.