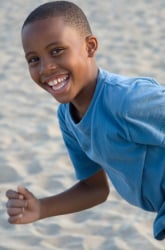 While many children have no problem learning their reading, writing and arithmetic by sitting at an assigned desk and completing worksheets, many others aren’t so lucky. They have trouble sitting at their desks for extended periods of time; they need to move around and touch things to learn most effectively.

In the past, these kids were considered hyperactive and difficult. Now we know better. These students aren’t being difficult. They just learn differently. They are kinesthetic learners. They learn best when they can move around and engage their small and large muscle groups.

Oftentimes, kinesthetic learners feel their way of learning isn’t as good because they can’t “sit and do the work,” but there are lots of ways to maximize their learning style.

Provide your child with hands-on learning tools, including:

Provide your child with hands-on learning opportunities, including:

Kinesthetic learners do things differently, but that doesn’t mean they do them worse.

Encourage your child to study in several short blocks of time, instead of one extended time period. Teach concepts with concrete examples; for example, teach "greater than" and "less than" with a crocodile puppet, rather than just numbers on a chalkboard. Have your child memorize information while moving. Kids can walk, skip or jump rope as they're learning the material. They don't need to sit at a desk, at least at home! Encourage your child to clap out sounds or syllables in words.

With a little help, kinesthetic learners can find tricks and techniques that make the system work in their favor. They just need some motion with their math, some rev with their reading. So get moving on getting them on the move!

Next Article: What It Means to Be an Auditory Learner
We enable strictly necessary cookies to give you the best possible experience on Education.com.Cookie policy