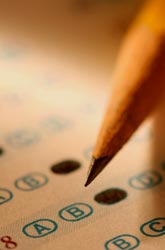 Along with changing leaves, blustery weather, and trick-or-treaters, Fall means one thing for college-bound high schoolers: the SAT. The school year is in full swing and SAT season has just begun. Parents spend big bucks on prep courses, study books, word lists and the like, trying to give their kids an edge, but there are some simple yet powerful tricks that will save time and money that every teen should have in her SAT tool belt. One of these tools packing a powerful punch is Latin.

Despite what many say about the new SAT, the era of the “SAT word” isn’t over. The SAT is packed with vocabulary questions, with a good deal of them in the Critical Reading section. But a solid understanding of vocabulary is essential to boosting your score in both the Critical Reading and the Writing sections of the SAT. At the core of many words are roots, and many of the roots that make up the myriad of words in the English language come from Latin. Caroline Taggart, author of The Classics: Everything You Need to Know, From Zeus’s Throne to the Fall of Rome, says that even without an official course in Latin, there’s a core list of roots every test taker should have at her fingertips, to arm her with the know-how to power through any unfamiliar words. Here’s her essential list:

1) Lux: Lux and its genitive form lucis both mean “light,” so words containing luc often have to do with making things clearer (‘“shedding light” on them).

2) Vertere: Vertere means “to turn” and is the root of all sorts of words about turning, in either a literal or a figurative sense.

Examples: vertigo, subvert, advertisement (literally “something you turn toward”)

3) Intra/Inter: Intra means “within” and inter means “between,” which explains the difference between the Internet, which is a link between various networks, and an Intranet, which is confined to an individual company.

4) Pre/Post: Anything beginning with pre- has a good chance of meaning “before”; post- is likely to mean “after.”

5) Super: Super means above or beyond.

6) Contra: Contra means against, so lots of words beginning with this suggest conflict or disagreement.

7) Anti: Anti also means against and is often used in scientific terms to mean “acting against” or “the opposite of.” Examples: antihistamine, antidepressant, anticyclone, anticlockwise

8) Ante: The words in the previous entry are not to be confused with ante, with an e, which means before.

9) Multi: Multi means much or many.

It can also be useful to know that bi- and di- both mean two. Examples: bigamy, bilateral, dimorphous, dioxide

And that hemi-, demi- and semi- all mean a half. Examples: hemisphere, demigod, semicircle

Examples: per cent (ten per cent = ten in every hundred), century, centurion

12) -vore: In Latin, vore means “to eat greedily.” In many words that contain –vore, for example herbivore and carnivore, the -vore is concerned with eating. So if you come across a fructivorous monkey or sanguivorous bat, you can at least be confident that you are being told about their diet, even if you aren't quite sure what it is they eat.

13) –cracy: meaning “rule,” often to do with government. So when you encounter a word containing –cracy, you simply need to find out what the first part of the word means to know who’s in charge.

And, in a more specific branch of science, zoo- is to do with animals. The modern word zoo is short for zoological gardens, a place where animals could be studied. Other examples: zoology, zoochemistry, zoography, zoomorphism

16) Mater/pater: Mater and pater mean “mother” and “father,” so that's a clue to the meaning of anything beginning with matri- or patri-.

And astro has to do with the stars.

19) Demo-: Demos was the Greek word for people, so words beginning with demo- or dema- are often to do with the people, as opposed to the aristocracy or the government.

Following on from that, populus was Latin for people.

20) Anthro: Anthropos was the Greek word for a human.

This last item is an excellent example of how your test taker can use this root knowledge to work out the meaning of words she may not have met before: androgynous combines elements of both man (andro) and woman (gyn) and is used to describe a person or a plant that has both male and female characteristics.

The bottom line is that armed with a great vocabulary, your high schooler will have a leg up in those crucial Critical Reading and Writing sections. A solid understanding of Latin roots within the English language will not only help your teen on the SAT, but will also help with essay writing and boost her language and communication skills. With these quick tricks in her tool belt, your test taker will be ready to take on any word, SAT or otherwise!

Great Resources to for SAT Prep:

For lots more on the Latin and Greek languages and cultures – all in bite-sized chunks and easy-to-swallow prose – see Caroline Taggart’s latest book The Classics: All You Need to Know, From Zeus’s Throne to the Fall of Rome.

Next Article: Is the SAT in Trouble?
We enable strictly necessary cookies to give you the best possible experience on Education.com.Cookie policy