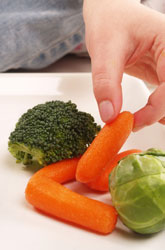 Last week, First Lady Michelle Obama announced that she would be leading the national effort against childhood obesity, a decision that has been embraced by experts and groups that cite the one-third of all teens who are estimated to be overweight in the country. The national initiative, appropriately enough, is called "Let's Move."

"With nearly one in three children either overweight or obese (and therefore at higher risk for many chronic diseases), the Robert Wood Johnson Foundation recognized that we had to act to prevent today’s children from living sicker and dying younger than their parents’ generation," said Dwayne Proctor, Ph.D., director of RWJF’s childhood obesity team, explaining why the foundation decided to join the effort against obesity.

Another group that quickly joined the effort, led by the First Lady, was the American Academy of Pediatrics, along with a good chunk of the departments under President Obama and as much as $1 billion in federal support over the next decade.

"Anything we can do to call the public's attention to such a critical problem is a wonderful thing," said Dr. Dan Levy, a national spokesman for the AAP and a co-found of the Obesity Task Force in Maryland. "It's not just the immediate problem but the implications for the future that are so critical. We have a whole generation of kids who may not live as long as their parents."

In announcing the campaign, Michelle Obama laid out four areas that she will push for, both through public education and federal programs:

"This isn't about inches and pounds or how our kids look," the First Lady said in a press conference introducing the new initiative. "It's about how our kids feel and how they feel about themselves."

Levy said having someone as popular and high-profile as Michelle Obama is important in the fight against childhood obesity. Still, he stressed that ultimate success of the effort rests with the overweight kids and their families who are now battling stagnant lifestyles, too much fast food, and not enough attention to what they eat.

He offered some tips for families to follow to help gain the upper hand against obesity:

Working to help make the effort a success is the RWJF, the W.K. Kellogg Foundation, the California Endowment, Nemours, Kaiser Permanente and the Alliance for a Healthier Generation, all brought together in a foundation called the Partnership for a Healthier America. The foundation will work to accelerate the First Lady's goals whenever possible, said Proctor.

Levy said the goal of reducing childhood obesity in the country is huge, but with Obama, the foundation and so many partners, he is hopeful. "I think it's wonderful that someone as visible as the First Lady has embraced this issue," Levy said. "That's a fabulous thing ... and I think it can be very, very useful."

March 1, 2010
Next Article: Assessment Literacy in Today’s Classroom
We enable strictly necessary cookies to give you the best possible experience on Education.com.Cookie policy