Log in with different email
For more assistance contact customer service
Parenting and Families
Fatherhood and Self-Development
Calling All Dads This Back-to-School Season!

Calling All Dads This Back-to-School Season! 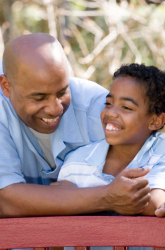 How much power can 800,000 fathers generate? Enough to jump-start a movement, and it all begins with the simple act of walking their children to the classroom.

This back-to-school season The Black Star Project, a Chicago-based group, is heading up the 7th Annual Million Father March. The goal is for dads to bring their children to school on the first day, with the hopes of establishing a culture where fathers are active in their children's education.

The numbers are pouring in and while the Black Star Project doesn't have any firm figures yet, they are aiming for 800,000 fathers in 600 cities to take time off of work to escort their children into school.

While the project encourages men of all races to take part, the event is focused on African-American and Latino communities in an effort to eliminate the racial academic achievement gap. Organizers want grandfather's, uncles, big brother's and other male figures to stand in for dads who can't be there.

What's the power of one day? Black Star Project Founder Phillip Jackson say it sets a tone for the rest of the year that education is important. “Attendance is directly related to academic performance,” he says. And in a country where the drop-out rate of black students is twice that of white students, any day at school is a big day.

But, says Jackson, it's not just about the first day back. The Black Star Project hopes the spirit of the Million Father March can continue throughout the school year, with men regularly participating in their children's academic lives. The numbers throw weight behind the movement: A 1997 study by the National Center for Education Statistics reported that children with highly involved fathers were more likely to get As, enjoy school and participate in extracurricular activities. In addition, those in grades 6-12 were less likely to be suspended, expelled, or repeat a grade. “There is a necessity for a male persona in the lives of children,” Jackson says.

The Black Star Project heads-up events year-round to get dads involved in their children's lives. The Men In Schools Day, for example, encourages fathers to go into their children's schools to serve as mentors, coaches, etc...... “We want the fathers to come up with the activities they feel comfortable with,” Jackson says. For more information on Black Star Project events check-out their web site at: www.blackstarproject.org.

So, dads: If you want your children to value school, show them the way...literally!