How to Help Every Child Find Success in Math 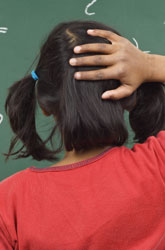 Many students believe that math is an inherited ability ­– either they have the math gene, or they don’t. But recent research shows that inborn talent might not be as important as we think. In the long run, the most successful students are often those who work the hardest, not those with the highest IQ’s. These students believe that that perseverance, not an innate gift, is the key to achievement.

In her book Mindset, The New Psychology of Success, Carol Dweck argues that a positive mindset is what makes some students push themselves when others give up. Students with a “fixed” mindset believe that they were born with a certain set of talents. They see challenges as a sign that they’ve reached the limit of their natural ability, and they stop trying. But students with a “growth mindset” believe that there are no limits on their potential, and view challenges as a chance to learn and improve. They know that their intelligence can be built though experience and effort, and are not held back by the idea of inborn restrictions.

Geoff Colvin delivers a similar message in his book, Talent is Overrated. He demonstrates that success is almost always the result of what he calls “deliberate practice,” a concentrated effort to improve one’s skills through focused effort. Inborn talent might make a difference when a subject is first tackled, but years later it’s the hard workers who are the most successful. Math teacher Kim Callan agrees: “It is rare for a hard-working student to fail my class.”

Parents play a key role in cultivating a child’s mindset. Without positive role models, children can succumb to the idea that if something’s not easy, it’s not worthwhile. Here are some DOs and DON’Ts about helping your child learn that math, like life, is less intimidating if we cultivate the right mindset.

Having the right mindset is critical to success. Children need to believe in their ability to overcome challenges through concentrated effort. If you place your child in the right math class and encourage her to work hard, there’s no limit to what she will be able to accomplish.

Students can learn math skills in a fun environment with our math games. We have other types of useful math resources as well.