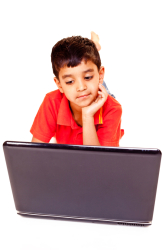 Teaching today’s children manners isn’t as simple as “please” and “thank you.” Ninety percent of American kids have an online history by the time they’re 2 years old, and almost 60 percent of kids ages 6 through 9 go online every day. The Internet and fancy cell phones pose new dangers to kids, but they also pose new ways for kids to flout society’s conventions. Learn what good manners you should teach your little techie.

Teach your child these modern manners and feel confident that she’ll behave as well in the virtual world as she does in the physical one!

Next Article: Key Things Parents Can Do To Make Sure Their Children Are Prepared For The 21st Century
We enable strictly necessary cookies to give you the best possible experience on Education.com.Cookie policy