Log in with different email
For more assistance contact customer service
Parenting and Families
Online Gaming for Kids: Teaming Up to Play It Safe

Online Gaming for Kids: Teaming Up to Play It Safe 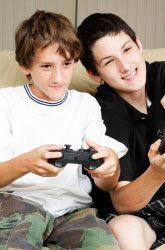 In our wired world, you'd be hard pressed to find a kid without an online presence. We live in a computer age—your child will grow up exposed to smartphones, computers and video games, probably learning how to use them faster than you did. Though playing violent games can lead to antisocial behavior patterns, online gaming for kids isn't all bad. In fact, pro-social and learning-directed video games have been found to have a positive effect on children.

According to a 2007 study published in the "Archives of Pediatric & Adolescent Medicine," kids between the ages of 10 and 19 spend an average of one hour per weekday and 1.5 hours per weekend day playing video games. If you want to engage with your kids and have some common ground, why not join them?

Be a Role Model

Instead of banning your little gamer from the 'Net, navigate the murky waters of the gaming world together to instill values that'll help keep him safe on the world wide web. Walk through the process of choosing friends online, which sites to avoid, and encourage him to ask lots of questions. By talking about how Internet games should be played, you'll encourage pro-social behaviors such as sharing, helping others and using teamwork to accomplish a goal.

Games that promote positive social behaviors, such as Zoo Vet, Farmville and Super Mario Sunshine, can actually be beneficial for development. A 2009 study featured in the "Personality and Social Psychology Bulletin" found that kids, adolescents and young adults who played these pro-social games demonstrated positive social behaviors. Compared to participants that played neutral games, such as Tetris, those who played pro-social games were more likely to help someone out who was harassed or bullied.

All games are rated by the Entertainment Software Rating Board, ESRB, who assigns them based on game content. Here is a breakdown of the ESRB's system:

If you encourage the right kinds of games, play with your kid to monitor use and set ground rules for playing, his online gaming experience can result in better adult behavior.

Here are some tips for choosing games and getting your kids to play with you:

Playing games with your child allows you to more effectively watch his use and activity, curbing it if he starts to disappear too often into the gaming world. With your guidance and help, online gaming for kids can be a skill-building experience.