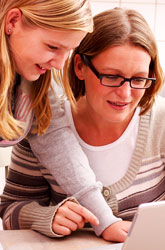 Chances are your teen has a page on Facebook, the social-networking website with a massive following among users ages 9 to 99. And, chances are, if you've heard of Facebook, you've probably also heard of Twitter, another player in the ever-expanding fray of social networking platforms, micro-blogs and the like. Perhaps you have a Twitter account. But does your child have one too? And as a parent, should you be concerned about Twitter in the hands of your child?

The short answer: There’s no reason to ban your child from Twitter, but it's important that both of you understand its ins and outs, its pros and cons and how to use it properly.

Twitter is similar to Facebook in that users can broadcast their thoughts — from the most inane to the most earth shattering — for the world to see. But there are a few key differences from Facebook:

While 14 percent of America’s 30 million Twitter users are 17 or younger, according to Web analysis firm Quantcast, the site is more popular among adults and has a more professional feel than Facebook. Faye Rogaski, founder of Socialsklz :-), which teaches communication skills for the modern age to young people, says teens often start Twitter accounts and then tend to forget about them.

Still, Twitter is potentially a means through which personal information can fall into the hands of people who shouldn’t have it. The key – especially for kids and teens – is to be smart and to be careful.

If your child is interested in exploring the world of "tweets" and "retweets" and the like, Rogaski advises that you and your child set up the account together. The two of you should discuss who the child will follow and who can follow back. But how can you and your child proceed savvily from there. Here are some tips from the experts:

Some Final Dos and Don'ts

Do: Set up your own Twitter account, if you haven’t already. This is the best way to learn about how it works and how to use it properly.

Don’t: Ban your child from using Twitter. This will only make her more curious about it, Scheff says.

Do: Set up a Twilert account for your child’s Twitter handle. This service allows you to see what is being said about your child on Twitter.

Rogaski says teaching your children how to use the Internet is as important as teaching them how to cross the street. And these days, learning how to use Twitter responsibly is part of that. “As a parent, you have to empower your kid with knowledge." The more you and your child know, the more you both can be smart and savvy social networkers.