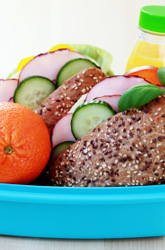 Salad, sandwich and...slime? While the first few options sound like standard fare for a school lunch menu, the option of slime sounds like a Nickelodeon prank gone wrong. Earlier this month, the USDA announced its decision to buy "pink slime" beef product for the National School Lunch Program. Nicknamed for its unsightly appearance, the product in question is actually a beef filler composed of mixed cow bits treated with ammonia.

Controversy has arisen in recent months over the nutritional value of the by-product and the dangers of serving ammonia-treated beef. Though the United States Department of Agriculture maintains that the product is safe for consumption, many industry experts have expressed concern—notably, health advocate and celebrity chef Jamie Oliver called pink slime "bits of sinew" in a condemning video.

In response to widespread public outrage, the USDA has offered a slime-free option with next year's lunch plans. While many schools have banned pink slime until an alternate's available, other school districts continue to serve the filler with no plans for a change. Regardless of where your district stands on the issue, there are steps you can take to make your child's lunch more nutritious. Whether your kid prefers to bring food from home or buy it at school, use these tips to get him a healthier lunch ASAP.

While you can't force you child's school to nix pink slime now (or even next year), it's important to realize there are many ways you can make his lunch healthier without spending a fortune on organic spinach. Use the tips above to pack a nutritious lunch at home or push for better choices at school: either way, you'll be sure to make a change for the better!