Log in with different email
For more assistance contact customer service
School and Academics
Prayer in Schools: Benefits from Both Sides

Prayer in Schools: Benefits from Both Sides 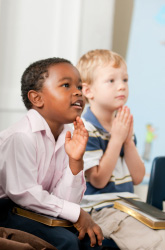 Prayer in schools is a touchy subject. It puts parents, teachers and administrators at odds, and even simple discussions spiral into heated sidebars about crime rates, moral compasses and the Constitution. But while parents and educators get wrapped up in semantics and principle, kids still have to go to school.

When the Gallup Poll last surveyed Americans in 2005, they found that 76 percent of us favor "a constitutional amendment to allow voluntary prayer in public schools." It's no surprise then that many schools continue to sponsor prayer on school grounds, despite the fact that it's unconstitutional. No matter which side of the debate you're on, you may find your kid on the other side of it—at odds with the school's policy regarding prayer. As the grownups hash out their differences, both religious and secular kids can find benefits no matter which type of school they attend.

Pros for Religious Students at Schools without Prayer

Take the opportunity to teach initiative. It's your child's school, so help her get invested. Prayer hasn't been banned from school; teachers just can't initiate it. She can start a school club to connect her, and other like-minded peers, to religion. They can pray, meet and discuss their spirituality anywhere before, during and after school, so long as it doesn't infringe on other kids' rights. Teach proactivity now and it will be a lifelong skill.

Shift the focus to family. Larry Forthun, professor of Human Development at the University of Florida advises that "a child's spiritual foundation is in the home... parents can encourage spiritual growth by actively engaging children in religious and spiritual activities including prayer." No prayer at school? Schedule weekly time as a family to meditate, discuss faith, pray or read the Torah together. Or, enroll an antisocial teen in a youth program at your spiritual institution to build her faith with her peers—without mom and dad cramping her style.

Reach across the generation gap. Use the absence of prayer to open a dialogue. A 2010 Pew Research Center survey found that one-quarter of young Millennials—the generation born after 1980—don't affiliate themselves with a specific religion. Talk to your child about his core beliefs. They may be different than you think. The Pew survey found that even religiously unaffiliated youths share many of their parents' beliefs about life after death, morality, heaven and hell.

Pros for Non-Religious Students at Schools with Prayer

She's less impressionable than you think. It's natural to worry that your child may be indoctrinated by Christian prayer at school, but that's statistically unlikely. According to a Pew Center survey of the U.S. Religious Landscape, only 4 percent of kids raised as religiously "unaffiliated" grow up to later affiliate themselves with a religious group. You have more influence than you think. Spend time once a month to talk candidly with your child about your personal beliefs and the beliefs discussed at school.

Take advantage of the conflict. One of the accidental benefits of the prayer debate is that it's polarizing. Educators often choose schools with prayer because they're passionate about their faith and their work. According to Father David M. O'Connell, president of The Catholic University of America, this passion adds value to a school that "will make a difference in [students'] education and their lives." Meet with teachers and counselors to learn how to put that enthusiasm to use to push your student academically.

Apply to more universities. For a struggling student, broadening the applicant pool can only be a good thing. There are over 1,000 Christian Universities in the U.S. that take applicants no matter their religious beliefs. And your child's application may look better coming from a school with prayer. Universities like Benedictine University see spiritual activity as a positive link to student retention. According to their Director of University Ministry, "Retention means stability in a person's life and the ability to handle adverse situations."

Adversity has a funny way of opening dialogue and strengthening families. Looking on the bright side may help you gain a pragmatic perspective on a hot-button issue and help your child benefit—no matter what side of the fence he finds himself on.