How to Cope with Preschool Nightmares 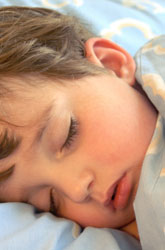 Collect This Article
3.7 based on 6 ratings
by Education.com

Children usually begin experiencing nightmares about the age of 18 months, and the nightmares start to occur more often and more intensely throughout the preschool years. Preschool nightmares usually involve feelings of helplessness and danger, and often involve escaping from monsters or animals. Around the age of five, nightmares generally begin to lessen in intensity and frequency, although they may increase just prior to starting kindergarten because of the worries that can accompany starting a new school.

Nightmares, in both children and adults, often arise during times of stress and uncertainty. Preschool children may be more prone to experiencing nightmares than are older or younger children because they are going though a period of major adjustments. They are learning how to deal with a lot of unfamiliar situations and more unpredictable environments. Preschoolers spend increasing amounts of time away from home and their primary caregivers, while simultaneously having to learn how to hone their social skills within a classroom full of children from various backgrounds. When adults have to deal with this many changes all at once, we, too, often show the stress through disturbances in sleep.

Nightmares can be scary, even for adults. We wake up sweating, with pounding hearts and a rush of adrenaline. We are startled and disoriented until we tell ourselves, “It’s okay, it was just a dream. It’s not real.” Preschool children do not have the experience or the brain development to calm themselves down after a nightmare, nor do they have a complex understanding of what is real and not real. These factors, in combination with the vivid imaginations of preschool children, can lead to a very scary nighttime experience.  Therefore a parent's job is to model calming behavior and self-soothing statements so that eventually children learn that they too can calm themselves down.

Here are some ideas for helping preschool children who have had a nightmare:

Relatively infrequent nightmares (1-2 per week) in preschool children should not be a major cause for concern. As long as you handle nightmares in a way that gives your child a few minutes of calm, soothing attention, and acknowledges his fears before firmly sending him back to bed, the nightmares should not have a major impact on your life or that of your child. On the other hand, if you have tried some of above tips, and the nightmares are continuing on a regular basis, getting more intense, or having a major impact on your child’s daily life, make sure to seek help from a pediatrician or mental health professional.

Next Article: Shifting Schedules: Switching from Two Naps to One
We enable strictly necessary cookies to give you the best possible experience on Education.com.Cookie policy