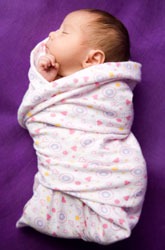 Collect This Article
3.1 based on 13 ratings
by Education.com

It's every parent's worst nightmare. Sudden Infant Death Syndrome, or SIDS, is the leading cause of death in infants ages one month to one year, and is identified as the sudden death of a baby with no clear cause. SIDS occurs when a baby is sleeping, either at night or at nap time. In 2007, the death rate for SIDS was 6.75 deaths per 1,000 live births.

So, what causes SIDS? Research continues, but experts believe some babies have an immature respiratory system that raises their risk of SIDS, according to a 2007 study published in the Lancet. During deep sleep, these babies may simply "forget" to breathe.

Exposure to tobacco smoke, overheating and sleeping on soft bedding or soft sleep surfaces may also increase the risk. Premature babies and babies whose mothers experienced diabetes, high blood pressure or who smoked or used alcohol excessively during pregnancy may also be at increased risk, according to Jason Jarzembowski, MD, PhD, of the Children's Hospital of Wisconsin in Milwaukee.

So what can you do to keep your baby safe during sleep? Currently, most incidents of SIDS that occur in the U.S. happen when a baby is sleeping with an adult or another child, according to Charles Shubin, M.D., and director of Pediatrics at Mercy Medical Center in Baltimore. He urges parents to practice A, B, C, which stands for Alone, Back, Crib. Below are a few more tips on keeping your baby safe during sleep:

For many years, parents had little information on SIDS, its causes and prevention. Today, though, we know a lot about how to cut the risk of SIDS. Armed with this knowledge, you can give your baby the safest sleep environment possible. Talk with your pediatrician about SIDS, and rest easy, knowing you're doing everything you can to keep your baby safe.