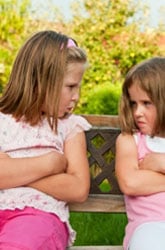 Sibling rivalry is nothing new. History is littered with stories of dueling siblings, from Elizabeth I and Mary, Queen of Scots to the Jackson family. And it's the stuff of many popular television shows: Your kids fight and probably relate to the lovable characters on the PBS kids show Arthur, while you chuckle over the antics of bickering brothers on Everybody Loves Raymond. In real life, though, sibling rivalry isn't so funny. Read on to learn about the causes of sibling rivalry and what to do about them.

Some siblings fight more than others. In the end, they're ultimately responsible for the quality of their relationship. Teach kids conflict resolution skills, set firm rules, such as no hitting, and avoid making comparisons or playing favorites. Over time, kids usually make peace with each other and the drama subsides.