Log in with different email
For more assistance contact customer service
School and Academics
Politics and Education
Is More School the Answer?

Is More School the Answer? 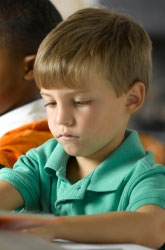 President Barack Obama has made education one of the cornerstones of his administration, calling for several reform measures to be put on the table in an effort to improve student achievement, including one very controversial idea: that our kids need to be in school more.

Central to his argument is that our academic calendar was designed for a nation of farmers who needed their children at home to work on the farm at the end of each day and over the summer season. “That calendar may have once made sense, but today it puts us at a competitive disadvantage,” President Obama said at a speech to the U.S. Hispanic Chamber of Commerce. “Our children spend over a month less in school than children in South Korea every year. That’s no way to prepare them for a 21st century economy. That’s why I’m calling for us not only to expand effective after school programs, but to rethink the school day to incorporate more time whether that be over the summer or expanded day programs for children that need it.”

Education Secretary Arne Duncan has echoed that call, stating that students should be in school six or seven days a week, 11 months out of the year.

Though the question of school instruction time has been batted around for decades, the words of Duncan and Obama now strike a cord—in part because they hold the purse strings for what remains of the economic stimulus money, including a competitive grant for innovative reforms called the Race to the Top.

Legislators and school chiefs around the country are proposing extended school hours, but one of the ideas gaining the most traction is the Expanded Learning Time initiative in Massachusetts. In 2006, the state included $6.5 million in the budget for grant money to support longer school days, a longer school year, or both—with a minimum requirement of an extra 300 hours per year. The reasons for implementing the program were pretty clear, says JC Considine, spokesman for The Department of Elementary and Secondary Education: “The traditional school calendar is no longer meeting today’s demands.”

Considine says that in designing the initiative, the education department wanted to ensure that schools didn’t just add extra time to the day, but were thoughtful about the quality of that extra time. That’s why they required that schools add instruction time in core subject areas, offer enrichment and applied learning opportunities, and create more time for educators to plan together and participate in professional development.

The initiative was expanded in 2009, with $17.5 million from the state. Right now, 26 schools out of the 1,850 public schools in the state are running with an Expanded Learning Time program.

While it’s still too early to tell if the extra time in school is translating into higher test scores, Considine says a recent survey shows that 77 percent of parents reported an improvement in their child’s academic performance.

But, as well as the Massachusetts program is doing, Considine says there are schools on the waiting list for grant money that won’t get it this year. At a cost of $1,300 per student, it’s not a venture to be taken lightly, especially for poorer states just trying to keep schools open the traditional six hours a day, 180 days a year.

“Given the cost of this type of reform, and the current fiscal environment, I would not expect many districts, states or the federal government to be making large investments in extending time in the near future (especially with one-time stimulus funds),” says Rob Manwaring, a senior policy analyst from Education Sector, an independent education policy think tank.

Instead of using one-time stimulus funds to dramatically reshift the academic schedule—a risky and expensive business—many districts are focusing on tried and tested ways to keep kids learning: after-school and summer programs.

Summer school. The very words conjure up images of stuffy classrooms filled with kids who—for reasons of misbehavior, absenteeism or academic challenges–have to make up for what they missed during the regular school year. Are summer schools really the remedial half-way houses that many think they are, and, better yet, should they be?

No to both counts, according to Brenda McLaughlin at the National Center for Summer Learning at Johns Hopkins. She says that summer programs should “recognize what parents and kids want and expect from summer. They want the summer months to be different from school.”

It’s true that most summer school programs are designed for a specific type of kid—usually from low-income or poor-performing schools. But, the goal of most programs is less about remediation and more about creating equal learning opportunities in an effort to close the achievement gap.

Research has shown that kids from middle class families have more opportunities to learn over the summer, through summer camps and family travel, than peers in low-income households. In fact, data from the Beginning School Study, where researchers studied summer learning loss in 800 kids in Baltimore schools, shows that by the end of fifth grade, lower-income children are more than 2 ½ years behind their peers in reading because of summer losses.

McLaughlin says when learning programs are offered to a focused demographic, it can be both good and bad. “When you’re in an environment where there are scarce resources, you want to target those resources as well as you can, but you also don’t want to set your target group apart. We want to make sure it’s a program all kids want to go to,” she says.

The most successful types of programs, says McLaughlin, are those that blend academic curriculum with hands-on enrichment activities. “They aren’t like traditional classrooms where everyone’s desk is facing the board. We are trying to shift the paradigm where kids are gaining valuable math skills while moving around and doing activities,” she said.

That means hosting a rocketry course to brush up on math and science, creating themes around learning, such as a sports theme where kids learn about percentages and averages, and hosting fun field trips to museums, parks and other learning hot spots.

McLaughlin is hopeful that new education money from the federal stimulus act will be used to create different models of summer programs that can be studied to see which work the best. Certainly, Secretary Duncan and President Obama’s public advocacy for extended learning can’t hurt those chances. What’s going to happen in two years when the stimulus money ends? McLaughlin says most of the money for summer programs comes out of Title I funds, which recur every year, and successful programs may be able to leverage further funding support through partnerships with community organizations.

McLaughlin sees summer programs as part of the greater effort to extend instructional hours to students. “It doesn’t have to be either/or. I’ve seen a program which extends the school year by one day. Well, that doesn’t eliminate the need for summer learning,” she says.

After-school programs are an easier option for many schools; usually teachers are paid by the hour, outside their normal contract, which makes it cheaper to fund and neatens up contractual logistics.

Like summer school, most after-school problems aren’t mandatory and won’t serve the entire student population, but they will be available for kids that need or want extra help.

The Saturday Scholars program, currently serving 4,000 of the district’s 46,000 students, is an eleven-week session to help students prepare for standardized testing in the spring, and it provides incentives such as free MP3 players and posters for kids with high achievement or attendance rates.

The after-school program, serving about a third of K-12 public school students in the District of Columbia, focuses on academics, wellness, and enrichment. Instead of just offering homework assistance, the program aims to compliment what’s happening at school by switch-hitting the spring and fall curriculum. In the fall, after-school teachers give kids a sneak peak into the day-school’s spring curriculum, so that they know what to expect. In the spring, students get a review of what they learned in their regular classes the previous fall. “We hope they will retain a little more and that it will be more enriching for them,” says Paul Detjen, the after-school program coordinator for DC Public Schools.

As important as the academics are, it’s the enrichment opportunities such as dance, art, and music that keep kids coming to the program, Detjen says. “Students don’t really see this as an extension of the school day because they are learning in a way that is different for them, and that’s what encourages students to stay after school.”

Experts say that it is programs that offer learning in a fresh way that will succeed. A report released in 2007 by Education Sector concluded that schools can’t just look at more instruction time as the panacea, but as part of a larger reform effort to improve instruction.

Ultimately, extra school time may work to improve student achievement, but only if that time is used well—a matter of more dollars and careful planning.