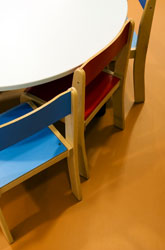 As school districts across the US try to determine how to cut millions of dollars while inflicting as little pain as possible, increasing attention has turned to news that some districts are considering eliminating kindergarten altogether in order to cut costs.

To parents of school-aged children, this idea seems to go against everything they know about the education system. Is it legal to wipe out an entire kindergarten program? Isn’t it mandatory for districts to offer kindergarten? Discussion and confusion cloud the issue of whether keeping kindergarten on offer is mandated by law, and just what the long-term effects of cutting kindergarten classes might be.

Capistrano Unified in California was one district proposing a plan to eliminate kindergarten. But according to Liz Blek, president of the National Kindergarten Alliance, the case in California is a matter of how one interprets the law. “California law says districts have to enroll age-appropriate children,” Blek says. “It doesn’t explicitly state that they have to offer a kindergarten program.” Blek says, however, that the proposal was not realistic. “Capistrano has to cut 25 million next year, but at this point it’s been accepted that eliminating kindergarten is not an option. The law says they can’t do that.”

This may come as a shock to parents living in states where kindergarten is offered and attendance is mandatory. The reality is that parents in some districts have found that no kindergarten programs are available for their children.

Jerlean Daniel, deputy executive director of The National Association for the Education of Young Children (NAEYC), believes kindergarten should be mandatory for all states and should be made available to all children. “Kindergarten is an important family and community resource that is the responsibility of local government,” Daniel says. “It scares me when a community starts talking about eliminating kindergarten. This is crazy in light of what we’ve all come to know about the importance of an early childhood education. And it’s the children from low-income families who end up suffering.”

Daniel describes kindergarten as critical in a child’s learning and development. “The kindergarten year is in many ways a transition year into schools,” Daniel says. “It’s just critically important that children have an opportunity to learn what school is about and what that kind of learning about—in terms of setting goals and being able to achieve them.” Daniel explains that one of the things people worry about at the other end of schooling is high school dropout. “This is something you can’t fix at the end of the education system. It’s just too late then,” Daniel says. “All of that begins very, very early—from the first days of schooling.”

And there’s yet another compelling argument for kindergarten (and prekindergarten) for all. Initiatives in early education are seen by some experts as more than just a school readiness strategy and a way to close the achievement gap; some believe we should look at early education as an economic development strategy. The National Conference of State Legislatures recently released a summary brief highlighting the economic advantages of early childhood education. The brief features reports from Art Rolnick, senior vice president and director of research at the Minneapolis Federal Reserve Bank, James Heckman, Nobel Prize winner in economics from the University of Chicago, and the High/Scope Educational Research Foundation, all of which characterize the economics of investing in early education.

Still, there are tough decisions to make at the district level. “It’s no small feat to cut $25 million,” Blek says. “It’s going to be nasty. If a district has to cut from kindergarten, my recommendation would be to cut back on the academics. We don’t need workbooks in kindergarten, for example. We can save a whole lot of money if we don’t buy workbooks.”

Daniel agrees. “Kindergarten has been put in a real squeeze in academic kinds of development—wanting kindergarten to be structured in terms of academics,” Daniel says. “I think that in recessionary times, the bottom line is something that has everybody’s attention. But still, you can’t make decisions without considering the hard evidence.”

Daniel urges policymakers to consider what we know about young children and what makes for a successful school career. “All the research and science is something that we supposedly value,” Daniel says. “Society needs informed, alert, caring, and responsive people. And that doesn’t start at high school. It starts in the early childhood years.”