Log in with different email
For more assistance contact customer service
Parenting and Families
Siblings and Multiples
Peas in a Pod: Should Kids Share a Room?

Peas in a Pod: Should Kids Share a Room? 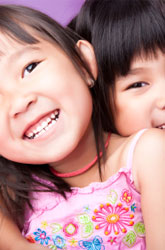 “Ew, share a room? With her? Never!” If this sounds familiar, you’ve probably spoken with your children about room sharing with each other. Surprisingly, these conversations seem to be becoming more and more rare.

“I would think that fewer parents are putting siblings together than in the past,” says psychotherapist and parenting expert Alyson Schafer. “Family size is shrinking; having three kids is the exception, and four is considered a ‘big family’ by today's standards. Also, houses are getting bigger. Little two bedroom post-war bungalows are now large double-car-garage mansions.”

Parents have taken advantage of these larger quarters to be able to give each kid the personal space an individual bedroom allows. In some ways, you may feel that you're selling your kids short if you “make” them share a room. But perhaps we should look at this subject differently. “Having separate space is a bit of a luxury if you look at how families live and co-habitate in one bedroom homes around the globe,” points out Schafer. After all, sharing a room with one sibling doesn’t seem like cruel and unusual punishment when you see full families of several children crammed into the same room—and happily so.

Advantages of Sharing a Bedroom

Parents who specifically choose to put their children into shared bedrooms point to the obvious advantages of doing so. “Children have many special bonding moments that are sort of forced upon them, situationally, by having to share their physical space,” says Schafer. “It teaches them that we can all put up with others and deal with it.” Children who grow up sharing a room with siblings have plenty of practice in sharing, compromising, and working out privacy issues – all of which may help them later on in life as they deal with roommates and spouses. Siblings also may become closer as a result of sharing a room with each other.

Disadvantages of Sharing a Bedroom

Despite the advantages of two or more children sharing a space, there are also downsides to sharing a bedroom that can be avoided by setting aside a separate room for each kid. In almost all circumstances, some sorts of conflicts will arise, whether it’s because one child wants to sleep with a night light while another wants the room completely dark, or because one child likes to listen to music whereas the other one needs silence in order to do homework.

In any of these cases, parents should take it all in stride. “Accept that differences are inevitable,” suggests Schafer. “Instead of thinking of it as a discipline or co-operation issue, think of it as a problem that needs a solution, and get the children involved to come up with suggestions of how to solve the problem. Try different ideas until you find one that works.”

There are, of course, several cases in which children should definitely not share a bedroom, whenever economically feasible:

In addition, tweens and teens may need a greater degree of privacy and may more strongly need their own personal space. At this age, boys and girls may especially feel uncomfortable sharing a room, as they begin to see the opposite gender in a different way.

If you decide to put two kids in some room, you’ll encounter several difficulties that you’ll have to deal with. Here are some pieces of advice from Schafer on how to ease the transition:

If you’ve chosen to put your children in separate rooms, how can you give them the opportunities for closeness that siblings in the same room seem to have? Try creating these opportunities as much as possible:

Sibling scuffles are a pain, but they're an inevitable part of growing up in a big family. If you're considering bunking your kids together, weigh the pros and cons outlined above to find out if a shared room will mean creating best friends that are as thick as thieves—or the outbreak of WWIII.

Next Article: Twins: Growing Apart, Growing Together
We enable strictly necessary cookies to give you the best possible experience on Education.com.Cookie policy