Log in with different email
For more assistance contact customer service
Physical Health
Sleep and Its Importance
Can Lack of Sleep Cause ADHD?

Can Lack of Sleep Cause ADHD? 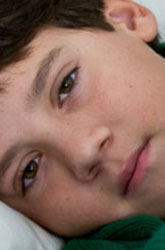 Collect This Article
4.5 based on 15 ratings
by Education.com

When parents ask how to give their children the best chance at school success, many teachers suggest something that may not seem particularly “academic”: a good night’s rest. Learning to read, write, multiply, or anything else is hard enough without the added burden of exhaustion.

Now a new study shows that lack of sleep can cause more than just sluggish brains: sleep deprived students are at higher risk of developing the behavioral symptoms of attention deficit hyperactivity disorder (ADHD).

The study, from a team of researchers at the University of Helsinki, Finland, monitored the sleep patterns of several hundred children using small wrist devices called actigraphs. They found that perfectly healthy 7-8 year-old kids who got less than 7.7 hours per night of sleep had increased behavioral problems—such as aggression, an inability to concentrate, and a lack of focus—all symptoms common in children with ADHD.

While there’s been a lot of research on the sleeping difficulties of children with ADHD, and a lot of research on sleep apnea and the behaviors it can cause, there’s been precious little research on how lack of sleep affects previously healthy children, says E. Juulia Paavonen, M.D., Ph.D., who led the study. Paavonen, who did her thesis on children’s sleep difficulties, looked at the increasing rate of ADHD and the fact that today’s children are getting significantly less sleep than children did a generation ago. She had a hunch the two might be connected.

According to the National Sleep Foundation, more than two-thirds of children experience sleep problems at least a few nights each week. Some children have difficulty falling asleep, others staying asleep. The result? School aged children average only 9.5 hours of sleep per night, instead of the 10-11 hours experts recommend. Preschoolers average 10.4 hours, even though it’s recommended that they sleep as much as 2 ½ hours more each night. These may not seem like huge numbers. But research from preeminent child sleep expert Avi Sadeh, of Tel Aviv University, found that getting just one hour less of sleep each night affects student performance by a whopping two grade levels. In other words, a sleepy third-grader will perform at the level of a first-grader.

“Lack of sleep does not cause ADHD,” says Lele Diamond, MFT, a child development specialist with an extensive background treating children with behavioral and emotional problems. But she says that lack of sleep can cause behavior that is virtually indistinguishable from it. “Not getting adequate sleep can cause many symptoms such as lack of impulse control, irritability, low frustration tolerance, and difficulty regulating emotions. Needless to say, there’s a strong correlation between all of these effects and poor school performance.”

Although most parents recognize the importance of sleep, getting their kids to go to bed and stay there is another matter entirely. Between bedtime power struggles, nightmares and night-wakings, and intricate sleep stalling tactics, many parents are exhausted by the process of putting their resistant kids to bed each night. Other kids go to sleep without a murmur. Is it nature at work, or nurture?

A little of both, says Noelle Cochran, PsyD, a clinical psychologist and child sleep specialist who works with Diamond. A child’s ability to fall and stay asleep is largely determined by temperament, but the environment parents set as well as the genes they contribute play a part. At the heart of success, Cochran says, is consistency. “The existence of appropriately clear boundaries will aggravate or improve upon a child’s natural proclivities,” she says, “Kids bring their biology and parents either support or undermine what’s already there.”

There are very few kids who need less than the average amount of sleep, experts say. Some kids naturally will get the sleep they need, but others will struggle to get what they need. “When a child is getting less than the average, as a parent you want to do everything you can to increase the amount of sleep your child is getting before it becomes a long-term issue,” Diamond says.

Ready to put your foot down and get your kids on the road to sleep success? Diamond and Cochran have built their careers on teaching parents across the country how to do just that. Here are their tips:

Changing a child’s sleep habits will not happen overnight. But it’s worth the effort; especially since as little as just one hour of extra sleep each night can have a profound affect on a child’s behavior.

“Sleep is highly undervalued in today’s society, and it may be considered a ‘waste of time’” Paavonen says, “particularly among children who have the constant enthusiasm to explore the world. But in fact, sleep promotes well-being, learning, social relationships and development in many, many ways. It’s the cheapest and maybe also the easiest investment that parents can make towards their child’s healthy development.”

Next Article: Are Children with ADHD as Intelligent and as Innovative as Their Peers?
We enable strictly necessary cookies to give you the best possible experience on Education.com.Cookie policy