8 Summer Games to Play with a Ball 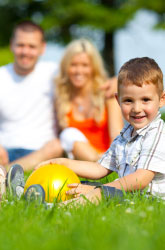 The sun is shining, the days are long and your child is...playing video games? If you're looking to get your kid to ditch the Wii in favor of outdoor summer games, you don't need a fancy pool or expensive swing set to pique his interest. With a little creativity and lawn space, you've got the materials to keep your little one engaged for hours in the backyard. Round up the neighborhood gang and usher them out the door for these favorite pastimes that require little more than a rubber ball and a gaggle of high-energy kids:

Listen, it doesn't take fancy sports equipment or extensive planning to get your kid up and active during those lazy summer days. Encourage your little one to make up new twists and varieties on the options above, and before you know it he'll have a roster of fun activities to cover him until school starts again.