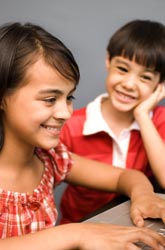 Collect This Article
3.3 based on 15 ratings
by Education.com

Your kid spent half of math class with his cell phone out, tweeted his way through Spanish and came home only to spend an hour on a social networking site—and he swears it’s homework. Delinquency run amok? Think again. Before you start revoking phone and computer privileges, read up on how classrooms are capitalizing on new media with their tech-savvy audiences.

Revisiting Cell Phones in the Classroom

Once the bane of high school teachers everywhere, cell phones have gone from irritating to imperative in the secondary classroom. Charting Magellan’s course, compiling a list of Shakespeare’s apocrypha or calculating pi to three hundred decimal places?—there’s probably an app for that. Cell phones can be used as cameras for media projects, portals for Internet access and graphing calculators, and their myriad uses evolve constantly with the integration of new technology. Though the threat of cheating or disruptive conversations via text message looms large, mobile enthusiasts argue that these evils existed in the classroom long before the advent of cell phones.

One particular use for cell phones in the classroom is Poll Everywhere. Poll Everywhere tracks live audience polling via SMS text messages or the web. While it offers tiered pricing for the corporate sector, the free version is popular for educators who use this slick app for quick quizzing or classroom surveys.

Think of microblogging as social networking lite. On Twitter, the king of all microblogging sites, 140-character texts are sent out as “tweets” to subscribers either from the Twitter website or through other SMS (short message service) applications. It’s hard to ignore Twitter’s appeal, and it’s no wonder that many school teachers are taking their classrooms into the Twittersphere.

Some instructors use Twitter simply to send out class reminders to students—“vocab test on Wednesday!” and that sort of thing. But there are many other uses in secondary ed for Twitter, with its twin appeals of immediacy and brevity.

It’s no secret that education funding is suffering. If a laptop for every student can be tough for schools to pull off, a mouse for each student isn’t as much of a stretch—Microsoft is hoping teachers will see things that way. Its program Mouse Mischief works in tandem with Microsoft PowerPoint, allowing teachers to include interactive elements like multiple choice questions in their presentations. Students, using wireless or wired USB mice, click their answers in real time. It’s an easy tool for student engagement, and Microsoft has made management simple for teachers by enabling single-click commands and teacher controls that disable mice and set timers, among other things. The design sustains up to 40 mice in a classroom and has been tested around the globe. The premise is similar to that of PollEverywhere text polls, but capitalizes on what most schools already have, rather than banking on student cell phone ownership. For any student who has ever sat through a dry PowerPoint presentation, Mouse Mischief will be a welcome foray back into synergistic classroom technology.

Teaching in a Technocracy

Media changes at an unprecedented speed, allowing yesterday’s distractions to become some of today’s most definitive teaching tools—we’ve come a long way from the overhead projector and ditto machine. Whether in the form of 140-word microsummaries or cell phone camera documentaries, teachers around the U.S. are finding ways to harness this kid-friendly technology into vehicles for interactive and innovative education.

Next Article: Study Skills They Don't Teach in School
We enable strictly necessary cookies to give you the best possible experience on Education.com.Cookie policy