Log in with different email
For more assistance contact customer service
School and Academics
Helping Your Child with 21st Century Subjects
ExploraVision Competition: Imagining the Technology of the Future

ExploraVision Competition: Imagining the Technology of the Future 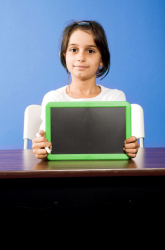 How do today's children imagine the technology of the future? For 16 years running, Toshiba and the National Science Teachers Association (NSTA) have teamed up to find out, with the ExploraVision Awards Program. The science and technology competition, for kids grades kindergarten through twelfth grade in the United States and Canada, aims to invigorate curious young minds.

This is how it works: the competition is split up into four grade categories (kindergarten through second, third through fifth, middle school and high school.) Students in each category work in teams of two, three or four—just like a real research and development team. The team, with help from their teacher or mentor, chooses a technology or an aspect of a technology that people use everyday. Students research how the technology works, and why it was invented. Then students imagine what possible solutions the technology could produce in 20 years, and write up their ideas in an in-depth report.

"We want the kids to think critically and evaluate ideas, so we challenge them to think of some new device based on what we have today and ask, 'What's the science or technology that's missing?',” says Gerald Wheeler, Executive Director of the NSTA. “And we want them to consider the negative and positive consequences of their idea.”

From novel treatments to drug addiction to solving the worldwide scarcity of drinking water, the ideas that students are coming up with show the breadth of their imagination and critical thinking skills.

Last year a group of ninth graders from Pennsylvania won first place in their grade category for their idea to harness energy from the heat tires create while rolling along the road. The device, called the “Passenger Tire Waste Heat Recovery System,” would take this wasted energy and convert it into electricity that would provide power to the car.

Wheeler says some of his favorites have come from the minds of the program's youngest participants. One year a group of kids from the kindergarten through second grade category designed a timed water fountain, Wheeler says. “Apparently, some kids get to the water bubbler and stay there, so they talked to a traffic engineer and realized they could use the same technology of a traffic light for their school's water fountain.”

Wheeler says in the last several years he has seen parts of kids' projects emerge in the real world. ExploraVision gives participants full rights to their ideas, and does not produce any patents from their work.

Wheeler says what makes ExploraVision different from your typical science fair is that it appeals to kids who may not be science-oriented. By working in teams, all students have the opportunity to find solutions to everyday problems by pooling their combined knowledge of science and technology. “I don't think I've seen any other competition where there's an equal numbers of girls to boys,” he says. Working on a team-generated project also provides these students with valuable lessons for future careers.

The competition also hopes to help invest in these children's financial future. Students on the four first-place teams will each receive a $10,000 U.S. Series EE Savings Bond. Students on the four second-place teams receive a $5,000 savings bond. The eight teams will also receive a free trip with their families, mentor and coach to Washington, D.C. For a gala awards weekend in June 2008.

The competition has become so popular that many schools in North America have incorporated it into their regular science curriculum. Wheeler says with science standards going the way of the technology age, ExploraVision has application and relevance. “It's a nice vehicle for bringing science and technology literacy into a child's education,” he says.

Next Article: New Exhibit Takes Kids Inside Their Brain
We enable strictly necessary cookies to give you the best possible experience on Education.com.Cookie policy