Teenage Smoking not Declining as Fast as Usual 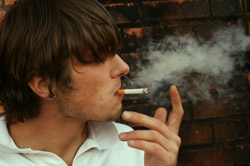 A Democratic Congress has moved into Washington. They're tackling health care. Talking about bipartisan cooperation. Thinking about redistricting. But one man says they should be focusing on something else... smoking. Not lighting up themselves, of course, but preventing kids across America from doing so.

William V. Corr, executive director of Campaign for Tobacco-Free Kids, says it's about time that Congress took on Big Tobacco. He's urging them to grant the U.S. Food and Drug Administration (FDA) authority over the black stuff, and the ability to crack down on the marketing and sales of cigarettes to kids.

It's not exactly new news. Congress first debated the issue nearly a decade ago, and the Senate passed it in 2004. But the House of Representatives failed to follow. With Democrats now in Washington, it just might finally happen.

"Tobacco use remains the nation's leading preventable cause of death," says Corr, "killing more than 400,000 Americans every year." In December, the National Institute on Drug Abuse released its annual Monitoring the Future survey. For the third year in a row, the survey found no statistically significant change in smoking rates for young adults.

That set off some alarms with the anti-smoking set. Over the past decade, smoking has declined by more than half among 8th and 10th graders and by more than 40 percent among 12th graders. But since the 1998 state tobacco settlement, total tobacco marketing has more than doubled to at least $15.4 billion a year, according to Federal Trade Commission. In fact, more than $41 million a day is spent on hawking the stuff, and much of it on hawking it to kids.

All that advertising works. According to the Centers on Disease Control (CDC), each day, approximately 3,900 young people between the ages of 12 and 17 become smokers. Twenty-three percent of American high school students smoke and 8 percent of middle school students. So what's a parent to do?

These tips were provided by the advocacy group, Campaign for Tobacco-Free Kids. For more information, check out their website at www.tobaccofreekids.org.